GOLD KEY TV ADAPTATIONS: "Voyage to the Bottom of the Sea," "I Spy," "The Man from Uncle," "Star Trek"

During the 1950s, Dell Comics often published books featuring characters licensed from movies, TV and radio. Their most successful books were those on the Disney characters, which were highlighted by Carl Barks' superb work on Donald Duck and Uncle Scrooge. Throughout that decade, while superhero comics were at a low ebb and made up just a small percentage of the books being published, Uncle Scrooge was regularly outselling Superman.

Actually, the creative work was all being done by a company called Western Publishing. Barks and the other artists, as well as the editors, all worked directly for Western. Dell handled the printing/distribution end of things. In the early 60s, Dell and Western had a falling out over financial issues and Western turned to Gold Key Comics for distribution.

They kept doing a lot of adaptations from other media, as well as some original stuff such as Turok and Dr. Magnus. We looked at Turok several times in the past, so today we'll thumb through a few of their TV adaptations from the 1960s.

Voyage to the Bottom of the Sea #10 (Nov. 1967): The Seaview is the third coolest looking fictional submarine ever designed. The submarine originated in a 1964 movie, but then moved to series television.  With Richard Basehart playing Seaview designer Admiral Nelson and David Hedison playing Captain Crane, the submarine encountered sea monsters, aliens, wax dummies come to life and other bizarre threats on a weekly basis. 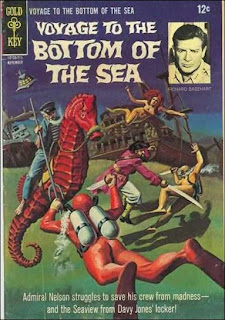 In this comic book adventure, they dive down to the bottom of the --the deepest spot in the ocean. Once there, they encounter Davy Jones. This version of Davy is an elderly guy in 19th Century sailor's garb, riding a giant sea horse. He has a mermaid/siren creature hypnotize the bridge crew and plans to add the Seaview to his collection of ships littering the local seascape. 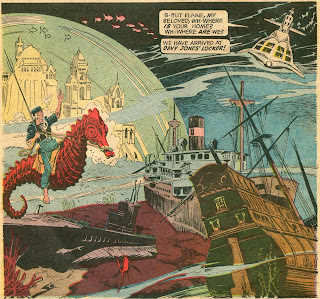 Admiral Nelson and another character manage to avoid the hypnotism, fight Blackbeard and the crew of a Spanish galleon, rescue the bridge crew and make a getaway.

It's a fun story with some nice imagery--the view of shipwrecks from different eras surrounding Jones' undersea city is particularly effective. But it's marred by a silly plot hole. Nelson and his ally avoid the Siren's hypnotic call by plugging up their ears, yet they can still hear each other speak. Huh? There's also a somewhat weak "It was all a dream!--or was it?" ending.

I Spy #3 (1967): Robert Culp and Bill Cosby played two urbane and witty spies in this 1960s adventure series. This comic story, in which Culp's character is ordered to assassinate an old friend who is supposedly trying to defect, doesn't capture the witty dialogue of the show. But it still tells a strongly plotted spy story with several nice twists and a short but well-choreographed gun fight at the climax. It's good, solid storytelling and a fun read. 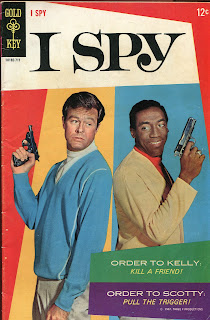 The Man from Uncle #19 (July 1068): Somewhere in central , there's a small kingdom that still maintains medieval technology and customs. An evil THRUSH agent, learning that the kingdom is a source of valuable rocket fuel ore, schemes to become prime minister. Napoleon Solo and Illya Kuryakin, posing as traveling minstrels, try to stop him. Illya ends up in a duel with the kingdom's champion knight, but manages to pull out a win by wiring his sword to his miniature radio and shocking his opponent unconscious. 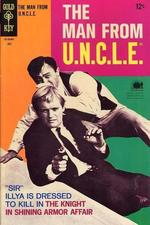 As with "I Spy," the comic fails to catch the tongue-in-cheek aspect of the TV show, but still tells a fairly solid story. 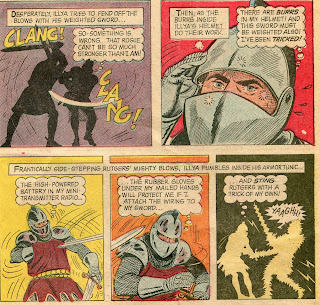 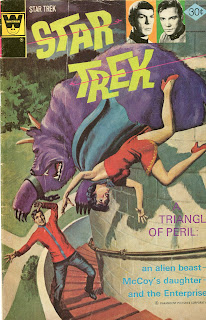 Star Trek #40 (July 1976): After being damaged in a cosmic storm, the returns to Earth for repairs. There, Kirk meets Dr. McCoy's daughter, a Xeno-zoologist who dislikes Star Fleet because she blames it for breaking up her parents' marriage. From here, two plot threads fan out in different directions, then come together again at the climax. One plot involves a creature that can telepathically relay thoughts from one person to another. The second plot involves an ex-crewman who hates Kirk and plans to destroy the while it’s in space dock. 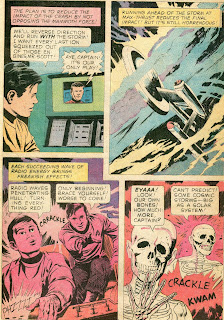 The eventual linking of the two plots is a little contrived, but overall the story is good. The artist made poor Dr. McCoy look like a white Chubby Checker, but his ship, monster and building designs are fun. The opening sequence, with the starship trying to weather the violent cosmic storm, is particularly good.

Overall, none of these tales are truly great, but they represent sincere attempts--usually successful--of telling entertaining, unpretentious stories outside the superhero medium.
Posted by Tim DeForest at 9:00 AM

Email ThisBlogThis!Share to TwitterShare to FacebookShare to Pinterest
Labels: Gold Key, I Spy, Man from Uncle, Star Trek, Voyage to the Bottom of the Sea