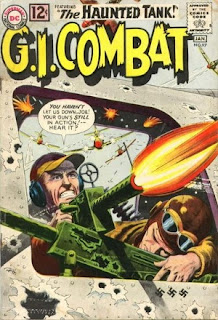 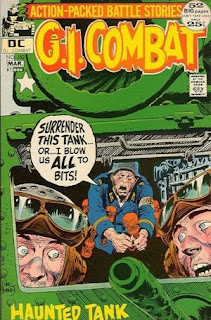 G.I. Combat #152 was a giant-sized 52 pager (costing a whopping 25 cents!) containing a total of five stories--four from the Second World War and one from the Civil War. I THINK all the stories are reprints, but I'm not sure. The DC wiki is very sparse on information for either this issue or issue #97. I know the Haunted Tank story is a reprint from the earlier issue and the wiki does identify one other story as a reprint. The 52-pagers from that era often featured reprints, but not always. Also, this was during a brief time in which every issue of G.I Combat was 52 pages, with the Haunted Tank story  being original and some of the back-up tales being reprints. But when the back-up stories were reprints, they weren't usually identified as such. So I simply don't know if the remaining stories in this issue are original or reprints. I also think I may have just used the world "reprint" far too many times within a single paragraph. Reprint-reprint-reprint.

Not that I'm critical of reprints. Even in 1972, most of the potential readers would have been too young to read the story the first time around. In the days before trade paperbacks were common, this was how we young 'uns learned about DC and Marvel history.

What makes this reprint a bit interesting is that the first page of "The Decoy Tank" is original. You see, in 1963, the Haunted Tank was still an M3 Stuart--a class of armored vehicle named after the Civil War general who haunted this particular tank (a vehicle commanded by a young officer who also happens to be named Jeb Stuart). So that's the tank Jeb and his crew were using in this particular story.

But in G.I. Combat #150 (Oct/Nov 1971), the Stuart is destroyed. The guys build a sort of Frankenstein tank out of the wrecks of other vehicles. This becomes the new Haunted Tank. 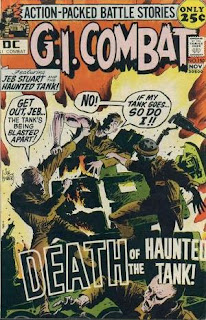 (I'm going to review that issue soon--because it's a really good one.) 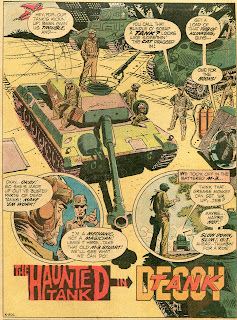 So when "The Decoy Tank" was reprinted, a page of original art was added in which the new tank has engine trouble, so they take an old Stuart out on patrol. The art for that page looks like Joe Kubert's work to me, though it's uncredited. There would have been nothing wrong with simply doing a straight reprint, but it's actually kind of nice that editor Joe Kubert was trying to fit everything into the proper continuity. Besides, the new tank had only been around two issues by this time, so I suspect Kubert didn't want to confuse readers by suddenly switching back to the old tank. Kubert's page also segues quite nicely into Russ Heath's art starting on page 2.

I also suspect that a deadline was missed, forcing a last-minute reprint. Which makes Kubert taking the time to add the new page all the more appreciated. 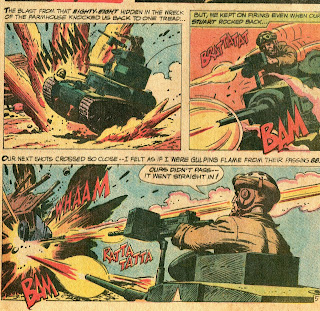 Anyway, the story is a good one. Jeb and his crew take the Stuart on patrol, surviving a few close calls with the enemy.
But then they stop to pick up a wounded G.I. Except the wounded G.I. is really a Nazi soldier who's holding a live hand grenade. 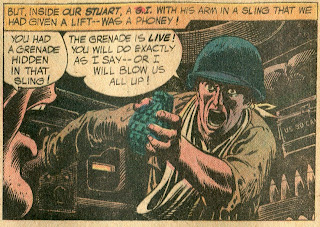 The idea is for the Germans to take a tank hostage, then force the crew to lure other American units into an ambush.

It's a perfectly good idea for a story, but Jeb's reaction to the situation makes the tale particularly noteworthy. He knows he can't let the Germans use his tank to kill other Americans--and he's perfectly willing to risk or even sacrifice his own life to stop it. But it's not just him--there's his crew to think about as well. If he jumps the German and fails to keep the grenade from detonating, then they die along with him. Does he have the right to get them killed in order to do his duty?

It's a point that gives the story a strong emotional backbone. And this is emphasized by Russ Heath's typically wonderful art.  I consider Heath, Jack Kirby and Carl Barks to be the three greatest comic book artists ever. And even though their individual styles and the subject matters of their stories were completely different from one another, all of them did the same things exactly right.

First, all three used their visuals to clearly tell their stories. Aside from simply looking cool, their art moved the plot along and always made sure we knew what was going on.

Second, all three were able to hit the correct emotional notes to highlight the important points of the story. In "The Decoy Tank," for instance, Heath gives us a lot of panels showing the cramped interior of the tank, emphasizing the tension of the hostage situation. 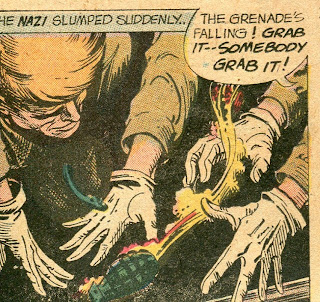 Third, all three were good at adding great detail to their art, both in the primary images and in the background scenes. It's fun to just look at any panel or page these guys drew and appreciate all the attention to detail. (Heath was noted for the amount of research he did--including often building models of what he'd be drawing.) 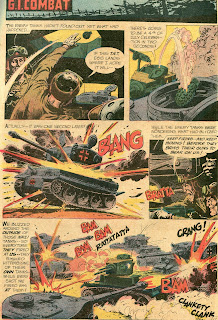 The page above is a good example of Russ Heath's ability to do all this. The first panel, for instance, shows a German Tiger tank visible through the observation slit. This effectively sets up the next panel, where Jeb manages to land the grenade in that Tiger's hatch--it shows us Jeb had a target at which to aim the grenade and the ensuing destruction of the enemy tank wasn't just dumb luck. The reversal of the "camera angle" between the first two panels adds to its effectiveness.

The fourth panel is a tight shot of the crew inside their tank, desperately blasting away with every weapon they have at the enemy tanks that surround them. Even with the hostage situation resolved, Heath still uses the image of cramped conditions to add tension to the situation.

The last panel--with the Stuart using its small size and speed to outfight a squadron of huge Tiger tanks-- is absurd from any sort of realistic view point, but Heath makes it look cool enough and "real" enough to be acceptable. The art (with a little help from the narration) makes it clear exactly how the Haunted Tank is able to win this apparently uneven contest.

That last panel actually might have been more effective without the sound effects, but that's arguable and a minor point regardless. It still ranks as a 9.3 on the Bogart/Karloff Coolness Scale.

Reprint or original--it doesn't really matter. It's a great story regardless.