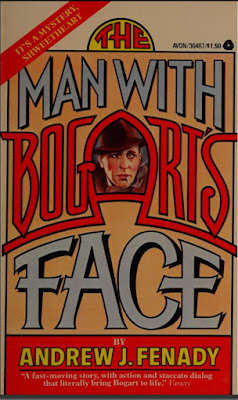 Written in 1977, The Man With Bogart's Face, by Andrew J. Fenaday, is a fun and loving tribute to Bogart and to classic detective and noir movies. A man with a past that is only hinted at (he was somehow wounded at one point in the past and probably worked in the movie industry) has plastic surgery to make himself a double of Humphrey Bogart, then changes his name to Sam Marlowe. He opens a private detective office and has a habit of "casting" people he meets as Golden Age Hollywood actors.

At first, we think he might just be nuts, but when he gets several clients that all turn out to want the same pair of priceless sapphires, he proves to be a good detective and more than able to handle himself in either a fist fight or gun fight. He follows up clues intelligently and the ability to "read" the people he meets and deduce their motives. He might think someone should be played by Peter Lorre if life were an old movie, but he'll be correct in his understanding of that person's character.

There is a level of parody here, with a plot and characters that key off The Maltese Falcon. Other classic crime films (both Bogie and non-Bogie films) get shout-outs. For instance, there's a The Lady From Shanghai shoot-out with a hitman in a Hall of Mirrrors. And, like all good parodies, it obviously loves the subject it is making fun of while still being sincerely funny.

But it is also well-written enough to work as a straight detective story and get us to invest in characters we come to care about. The plot is convoluted, but ties up its various loose ends at the climax in a satisfying way.

It begins with a lady named Elsa hires Marlowe because someone seems to be stalking her father. That leads to a shoot-out in the Hollywood Bowl. Then several different parties show up to hire him to find two priceless sapphires known as the Eyes of Alexander. A beautiful woman (whom Marlowe immediately casts as Gene Tierney) is soon involved--both in the case and with Marlowe personally. Not surprisingly, the sapphires prove to be linked to Elsa's father. Fists and bullets both fly as Marlowe works to get to the bottom of it all.

So we have a strong detective story and a loving parody mixed together to form a tribute to a time when studios such as Warner Brothers and R.K.O. The novel is no longer in print, but it's worth tracking down.

Email ThisBlogThis!Share to TwitterShare to FacebookShare to Pinterest
Labels: detectives