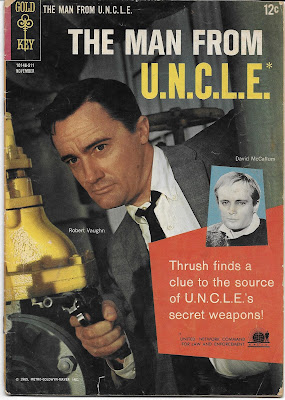 Gold Key's The Man from U.N.C.L.E. #3 (Novemberr 1965) was written by Dave Wood, with art by George Tuska for the first 26 pages and (for reasons I imagine are lost to the ages) Dan Heck stepping in to draw the last 6 pages.

I tried three times to write up a summary of this story. Each time, the convolutions and lightening fast pace foiled my attempts to concisely summarize it at all. This isn't a criticism of the story--the twists and turns of the plot are part of what makes it a delight to read.

The bare bones summary is that THRUSH is trying to find the secret lab where a scientist is cranking out secret weapons for U.N.C.L.E in the forms of toys and novelty items.

Starting with this premise, this comic book succeeds in exactly the same way the early seasons of the TV series succeeded. The story can be enjoyed as an espionage thriller, but can also be appreciated as a parody of that genre.

Specifically, it was making fun of the many, increasingly wild gadgets that were becoming a staple of the James Bond films. This began with From Russia, With Love (1963) but really went into high gear with Bond's Aston Martin in Goldfinger (1964).

In the U.N.C.L.E. story, we get a direct reference to the Aston Martin when Napoleon and Illya are trying to escape a carful of THRUSH assassins and actually use the oil slick trick. But in this case, THRUSH has one-upped them with a pursuing car that squirts sand over the oil as it moves forward.

In addition to this, we get: 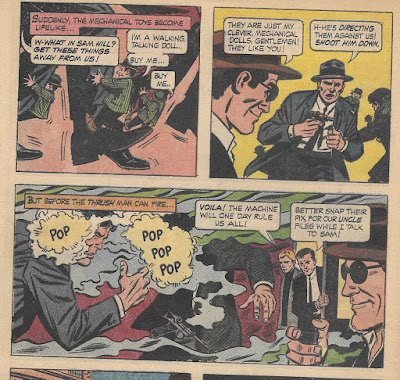 A small army of wind-up toys that crawl up THRUSH agents and then pop open to emit sleep gas. 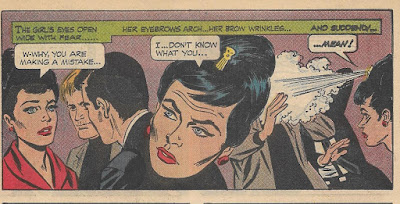 A hairdo that squirts ammonia gas into your eyes.

The creepiest looking robot boy in the history of robot boys.

Contact lenses that allow you to hypnotise whomever you are looking at. 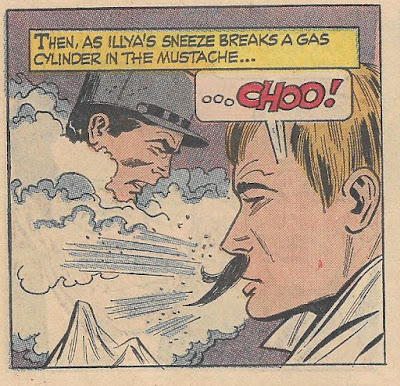 A fake mustache that emits a sleep gas when you sneeze through it.

And a fake suicide pill that puts you into a death-like coma and transmits a signal so that your partner can find you and give you an antidote.
It's all great fun. Though another issue remains my absolute favorite from the series, this one perhaps comes closest to representing that combination of real adventure and parody that the TV series initially did so well.
Next week, we'll finish our journey through an issue of Superman Family with another Jimmy Olsen adventure.
Posted by Tim DeForest at 9:00 AM