The 3rd coolest make-believe submarine ever

Voyage to the Bottom of the Sea began life as a movie. Produced in 1961 by Irwin Allen, the movie is actually pretty lame in terms of plot construction, but it did introduce the world to what has become the third coolest make-believe submarine ever. 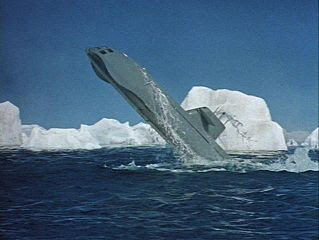 The Seaview looks pretty nifty. Designed by Admiral Harriman Nelson (played by Walter Pidgeon), it was a sort of combination warship & exploration vessel, equiped with both advanced laboratory facilities and a bunch of nuclear missiles. That pretty much leaves you ready to handle any situation that might arise.


The movie's plot involves Nelson's quest to use the submarine to save the world after the upper atmosphere mysteriously catches fire. It's a silly plot--which by itself isn't a bad thing. Silly science fiction can be entertaining in its own right. But (as stated above) poor plotting and some overacting by Pidgeon largely spoils the film.


But the Seaview is still cool to look at. The hull design (with observation windows in the bow and those neat-o bow fins) is definitely a fun one that gives at least the illusion of being functional as well. The sub's interior is also well-designed--including a small aquarium and a mini-sub that can be launched when needed. 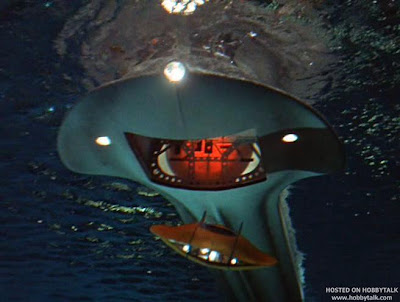 Voyage to the Bottom of the Sea came to television in 1964, with Richard Basehart as Admiral Nelson. The first year, filmed in black-and-white, mixed some science fiction elements together with Cold War-era spy stuff and did a number of strong episodes. Basehart was really good as Nelson, playing the role straight even when the scripts started to get silly.


The last three seasons were in color and gave us a re-designed Seaview, making the submarine even cooler. The bridge now extended forward to include the observation room, while a hanger for the Flying Sub was also added. When the plot called for it, the Seaview was capable of doing anything from electrifying its hull to firing a laser beam out of its bow-light.


The show became more science fictiony in the later seasons, running into countless monsters, aliens and time travelers. Any one particular episode might be silly-fun (the crew replaced by animated wax dummies) to silly-annoying (a guy in a lobster costume playing the latest invading alien). But even when a particularly inept episode was grating on your nerves, the Seaview still looked cool. There are, in fact, only two other make-believe submarines that are cooler than it is.
Posted by Tim DeForest at 9:00 AM

Email ThisBlogThis!Share to TwitterShare to FacebookShare to Pinterest
Labels: Voyage to the Bottom of the Sea