It was during the 1940s that Chester Gould starting portraying the villains in his comic strip Dick Tracy as men (and occasionally women) whose grotesque appearances mirrored their grotesque lack of morals. The 1940s is arguably Gould’s finest decade as a storyteller. Bad guys such as Prune Face, Shaky, the Brow and Flattop were tossed into violent storylines that kept the attentions of 30 million readers riveted on the comics page of their local newspaper. 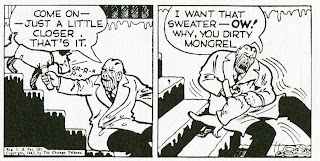 But when RKO decided to produce a series of Dick Tracy films, they didn’t draw on any of Gould’s established villains. That’s too bad—when you look at what make-up artists of that era were capable of (think of Jack Pierce’s work at Universal), producing an appropriately creepy-looking Brow or Pruneface doesn’t seem too impossible.

But I suppose the time and budget restrictions of B-movie production prevented this. Still, the Dick Tracy films did pretty good in coming up with acceptable villains. The first film, as we’ve already seen, featured Mike Mazurki sporting a vivid scar down his face. The second movie—Dick Tracy vs. Cueball (1946)—tossed shaven-headed actor Dick Wessel as a brutal thug appropriately named Cueball. Wessel doesn’t have much range as an actor, but this actually works well for him this time around—he is a truly menacing presence throughout the film. 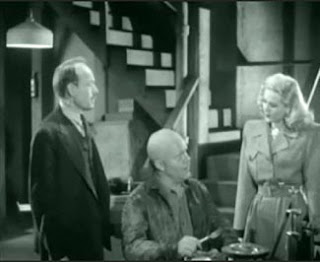 As with the first film, Cueball is a solidly written police procedural, filmed in a shadowy film-noir style that gives the violence a brutal edge without ever allowing it to become unpleasantly graphic. Cueball has been hired by some dishonest workers in the diamond industry to steal some valuable jewels. He proves to be more violent than they figured, though, when he strangles the courier, then decides to hold his erstwhile employers up for more money. By the time the movie is over, Cueball has racked up quite a body count.

It ends with a cool noir-looking chase scene through a busy railroad yard.

To quote Ron Backer’s excellent book Mystery Movie Series of 1940s Hollywood: “This film contains a menagerie of wonderful characters, played by wonderful character actors.” Cueball really goes to town with making the supporting characters individually interesting while giving them the sort of names that would have fit similar characters perfectly in the comic strips. The owner of a sleezy bar is Filthy Flora; an antique shop owner is Percival Priceless; and a gem dealer is named Jules Sparkle. 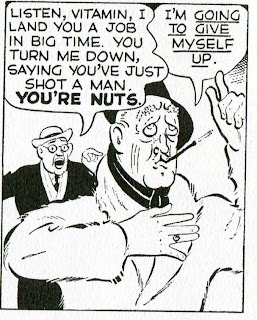 Though the villains are original to the movie, Dick Tracy’s friends are all taken straight from the comics. Pat Patton, Tess Trueheart and Junior are all there, while Ian Keith hams it up marvelously as Tracy’s actor friend Vitamin Flintheart.

This is Morgan Conway’s second and last appearance as the detective. Ralph Byrd, who had played Tracy in the Republic serials made a few years earlier, would return to the role for the final two films of the series.

It’s interesting to run across different opinions about which actor was better. In his book, Ron Backer considers Conway to be an uninteresting and one-dimensional Tracy. My DVDs of these movies, though, include very informative introductions by Max Allen Collins, the prolific mystery writer who wrote the Dick Tracy strip for over 15 years after Gould retired in 1977. Collins prefers Conway to Byrd, considering Conway to have more authoritative weight in the role.

Well, I like Conway as Tracy, but I’ve always preferred Byrd. I will say, though, that my opinion is probably colored by nostalgia. The first movie Dick Tracy I saw as a kid was a Byrd film (I think it was an edited feature-length version of one of the serials), so in my mind he’s always the “real” Tracy. If I’d seen Morgan Conway first, I’m not sure I wouldn’t prefer him in the role.