Sometimes, the title alone is enough.

As I’ve advised before—on more than one occasion—it’s always a good idea to rummage through the discount DVD bin at retail chain stores. You never know when you’ll find something worthwhile for a low price.

This time around, it was a set of movies and TV episodes titled Heroes of the Old West, containing a lot of the 1930s John Wayne movies that are often found in public domain Western sets. There were a half-dozen early Bonanza episodes that have slipped into the public domain—including a strong episode guest-starring Vic Morrow. Though it should be mentioned that the generic music played over the credits to replace the still-under-copyright Bonanza theme is downright awful. There’s a dozen or so Lone Ranger episodes—all of which I’m pretty sure I already have on various DVDs.

Two items on this set made me buy it, anyways. One is an episode of an early ‘60s Western titled Outlaws, which featured Barton Maclane. I actually hadn’t heard of the series, but always admired Maclane as a character actor. The episode turned out to be a very good story that featured another appearance by Vic Morrow, along with Dean Jones and Ray Walston (playing a manipulative and murderous con man—it was fun to see My Favorite Martian play an out-and-out villain).

The other “I gotta buy this” item was a 1937 film titled The Riders of the Whistling Skull, starring Ray “Crash” Corrigan. 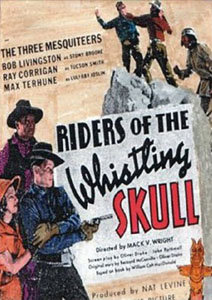 The Riders of the Whistling Skull? How can you NOT want to watch a movie with that title?
Well, it turned out to be a Three Mesquiteers film---in this particular instance: Stony Brooke (Robert Livingston), Tuscon Smith (Corrigan) and Lullaby Joslin (Max Terhune). 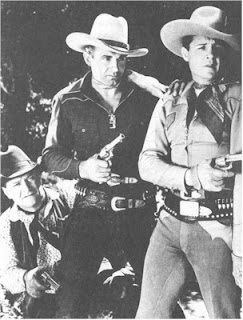 The Mesquiteers starred in a series of 51 B-Westerns between 1936 and 1943, sometimes with different actors and occasionally with different names for the main characters. John Wayne did eight Mesquiteer films as Stony Brooke. The films were obviously popular enough in their day, noted for including modern elements along with all the Old West stuff. But that wasn’t uncommon—in the B-movie and serial universe, the Old West remained the Old West pretty much into the 1940s, with horses, six-guns and Indian uprisings still common. The last few films in the series had our heroes fighting Nazis. In The Riders of the Whispering Skull, the modern elements are a little more subtle, reflected mostly in the dress of a few characters and Stony reading a modern pulp magazine (as opposed to a dime novel).

But in the end, the Three Mesquiteers didn’t quite achieve the same cultural longevity that the contemporaneous Hopalong Cassidy films would, or that Roy Rogers would achieve a decade later. And it’s actually easy to see why.

Whistling Skull is a fun enough movie. The three heroes get involved in helping a scientific expedition that’s looking for a lost city and a lost scientist. There’s a violent cult of Indians out to stop them and one of the expedition members also might be a murderer. A couple of people are, in fact, murdered and the expedition loses its supply wagon when the Indians attack. 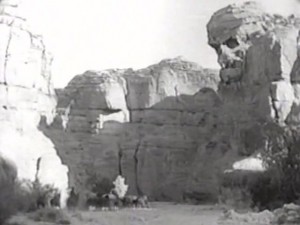 They eventually find a landmark appropriately called the Whistling Skull—a large rock formation riddled with caves that cause the wind to whistle when it blows through. The good guys are trapped inside the Skull for a time. In the finale, Tuscon is unarmed and being chased through the desert by Indians; Stony has been captured and is about to be executed; and Lullaby is trying to start an avalanche in a last-ditch effort to save Stony.

As I said, it’s all perfectly good fun---though the arrival of a posse in the nick of time is a bit too much of a dues ex machina. But the level of fun simply doesn’t rise to the same level as it does in the best Hopalong or Roy Rogers films. 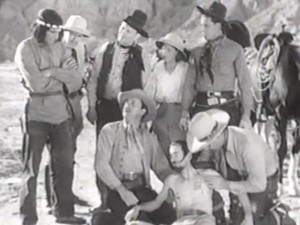 Why not? The problem is that there isn’t just one main hero with a couple of sidekicks. Instead, there are three heroes. That’s an important distinction. The movie only runs 53 minutes and in that time Stony, Tuscon and Lullaby each get a chance to play hero. In one sense, the movie manages to maintain this balance nicely, shifting between the characters without losing track of the story. But in a B-movie that’s barely enough long enough to qualify as a movie, there’s not enough time to do this AND give each of the heroes distinctive personalities. The individual quirks they do exhibit (Stony fancies himself a detective and Lullaby sometimes acts as the comic relief) come and go so quickly that there’s no time to really notice them.

Hopalong and Roy are as cool as they are because they had personalities we could latch on to. Hoppy’s boisterousness and ’s inherent kind-heartedness drew us to them and they became the moral heart of the movies they starred in.

All the same, it’s called The Riders of the Whistling Skull. That’s just COOL.
Posted by Tim DeForest at 9:00 AM