If your name is Robinson, DON'T GO INTO SPACE!

There were actually two different families named Robinson that got lost in space during the 1960s. 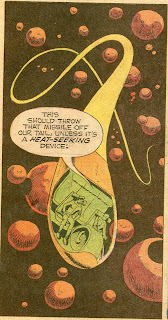 The story as to why a Lost in Space comic book featured a family named Robinson but NOT the family featured in the concurrent TV series is an interesting one. I covered this as part of the video I made at work covering the history of Dell and Gold Key comics, which I'll put at the bottom of this post for anyone interested.

Gold Key's Space Family Robinson (eventually subtitled Lost in Space) featured scientists Craig and June Robinson and their teenage kids Tim and Tam. They wandered about the galaxy in a pretty cool looking space station, trying to find their way back to Earth after getting caught in a cosmic storm. 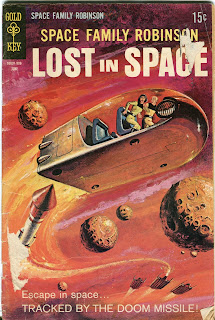 S.F.R. #34 (June 1969) is a typical example from the series. Tim and Tam are scouting a planet in the station's spacemobile. They find the remnants of a human civilization, but no living beings. It eventually unfolds that the surviving humans from this planet fled from a war against a neighboring world, with the 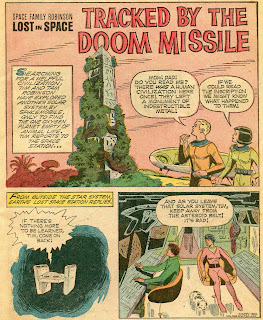 survivors hiding in suspended animation in a nearby asteroid. All this happened 8000 years ago.

The aliens from the other planets apparently hold grudges for a really, really long time, because they launch missiles at the spacemobile. Tim and Tam take refuge in the same asteroid as the surviving humans, who wake from their long sleep. When the aliens begin ripping apart the asteroid with anti-matter missiles, everyone (including Tim and Tam) escape in an invisible space ship. But when the ship's pilot is incapacitated, Tim has to pilot the craft to safety. 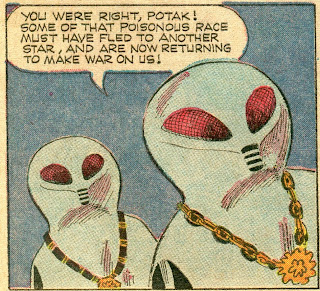 It's a simple and straightforward story, well-constructed but not particularly memorable. What makes it really work is Dan Spiegle's art. Spiegle had a talent for unique space ship, alien, planet-scape and space-scape designs, infusing the fairly average stories with a real sense of fun. The space station that the Robinsons called home is a great design, while this story also includes a creepy alien species and a pretty impressive looking spacecraft used by the escaping humans. 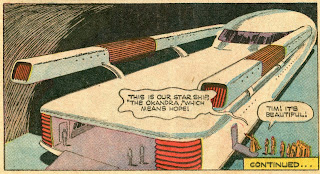 I don't think this version of the Robinson family ever made it back to Earth, just as the TV version of the family is apparently still wandering around among the stars. There's a lesson to be learned there--if your name is Robinson, just get a job at the local 7/11. DON'T apply to NASA for a job. That won't end well. 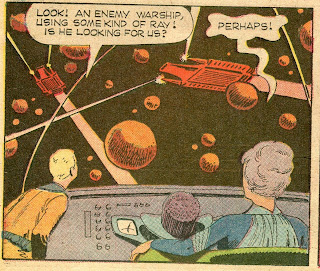