The First One Without Karloff

Boris Karloff played Frankenstein's Monster three times, bringing pathos and humanity to the role.  It's always been fascinating to me that for the rest of his life, Karloff received fan mail from children that were addressed to the Monster. "I know you are always scared, but if you came to my house, we could play and  no one will chase you and you won't have to be scared anymore. I will be your friend."

To quote Karloff himself:


When I played Frankenstein’s Monster I received sack loads of fan mail…mostly from young girls. These children had seen right through the make-up and had been deeply moved by sympathy for the poor brute. (from "My Life as a Monster") 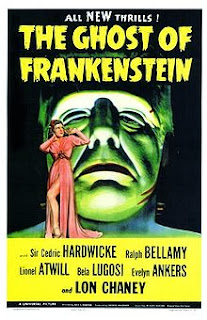 But by the time The Ghost of Frankenstein came along, Karloff had decided to retire from the role. So Universal turned to their other monster movie star--Lon Chaney Jr.  Though usually best suited for supporting roles, Chaney had done a magnificent job a year earlier as Larry Talbot in The Wolfman.

The Ghost of Frankenstein marked the series descent from A-picture territory into the realm of B-Movies. But, as my 1 or 2 regular readers know, I have a real love for the straightforward storytelling we find in the world of B-Movies. Ghost doesn't have the mythic power of the earlier films, it's still tells a good story.

Bela Lugosi reprises his role as Igor, the Monster's manipulative but only friend. I think this is Lugosi's best role--we never doubt he's evil, but we also never doubt that he really does consider the Monster to be his friend. Of course, that won't stop him from looking out for himself no matter what. 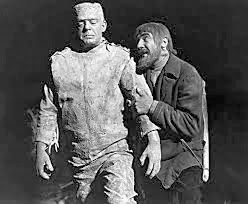 Igor was supposedly shot to death in the previous film (1939's Son of Frankenstein) and the Monster was knocked into a searing-hot pit of sulfur. But we soon find out that both had survived. Igor takes the Monster to the village of Vasaria, where a son of the original Doctor Frankenstein works as a brain surgeon. Soon, several people are dead and Igor is pretty much blackmailing Frankenstein into helping the Monster. This leads to a plan to replace the Monster's damaged and evil brain with the brain of one of his victims--Dr. Kettering.

But Igor has plans of his own concerning whose brain will be put into the Monster's skull...

It's all great fun, with the story jumping around from one plot point to the next in an internally logical manner. Chaney doesn't elicit quite the same level of sympathy that Karloff brings to the role of the Monster, but he still gives us a worthy effort. A scene in which he befriends a young girl come closest to emulating a Karloff-like moment.

The rest of the cast do fine jobs, most notably Lugosi and Lionel Atwill as Frankenstein's less-than-ethical assistant. The black-and-white photography and the lighting are wonderful, giving the movie the proper atmosphere. Despite the drop in quality when compared those made in the 1930s, I'm glad The Ghost of Frankenstein and the later films were made.