The Lone Ranger was popular in part because he had cool friends. There's a long list of other reasons, but Tonto and Silver were definitely factors in elevating how awesome the Ranger was.

In fact, Dell Comics realized that Tonto and Silver were both awesome enough on their own to rate their own comic books. Tonto was particularly good, with strong stories and great art (often by Alberto Giolitti).

Tonto #11 (May-July 1953) contains two Tonto stories that are such fun, I couldn't decide which to review. So I simply won't decide. I'll review the first story this week and we'll look at the second one next week.

There are several things I like about "War Party." Westerns in this time frame usually used Indians as default bad guys. Occasionally, fiction would go the Noble Savage route and imply that Indian cultures were either idyllic or simply better than everyone else. (This became more common in films and TV shows as time went on.)

Dell Comics did often use Indians as bad guys, but overall, the writers seemed to have a healthy appreciation of the fact that there is both good and evil in all cultures and that any culture will have elements to it that are legitimately open to moral criticism. Indians were good guys or bad guys depending largely on the needs of individual stories, but the end result was a more balanced view of human nature than we usually saw in Westerns from any media.

We see this in this particular story. Tonto is heading home to visit his tribe when he's ambushed and captured by a party of Crow warriors led by Black Beaver. Black Beaver, by the way, is a monumental jerk, waiting to attack the tribe only after the tribe's leader (Stone Bear) and his warriors are away on a hunt. Black Beaver plans on proving his courage by capturing women and children.

Fortunately for Tonto, he has a horse that is easily as cool as Silver. Scout rescues his human friend and they make a beeline for Stone Bear's village.

With the warriors gone, Tonto arms the youth and older men, then leads the tribe to a hopefully safe place. 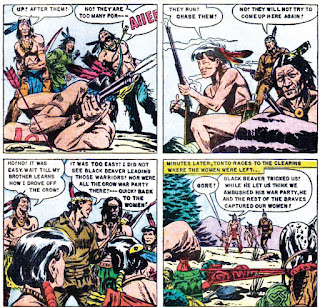 They repulse an attack by the Crow. But, though Black Beaver might be a jerk, he is clever. He and some of him men have circled around during the fighting and captured the women.

Tonto tails the Crows, who hold up on top of a mountain, in a seemingly impregnable position. By now, Stone Bear and his warriors have returned, but there seems to be no way to get to the enemy and rescue the women.

Stone Bear wants to cut off the Crow from their own territory and wait them out, but Tonto has another idea. If they can make an admittedly dangerous climb up one side of the mountain, they can catch the Crow with their pants down. (Loin cloths down?)

Giolitti's line work and compositions are particularly good here. The climb up the mountain is really tense and the final battle against the Crow is exciting. The action culminates when Tonto and Black Beaver go up against one another and Black Beaver gets one more chance to prove he's a monumental jerk before plunging to his death.

There's a subtle but nice touch at the end. Stone Bear makes a very wise decision about what to do with the captured Crow warriors. There may have been a temptation to have Tonto step in and suggest a solution--Tonto is, after all, the hero of the story. But the uncredited writer realized that Stone Bear was the chief and we needed to see evidence that he was a good chief and effective leader on his own without Tonto pulling his strings.

Also, the dialogue is in English, but it is presumably being translated for us from the Indians' own language. Notice that Tonto is speaking in grammatically proper sentences. It's a shout-out to the fact that though he never did get the hang of English pronouns, this doesn't reflect on his natural intelligence.

The story is available online at a website about Giolitti. As I mentioned early, next week will be a review of the second story from this issue.