Calm Down and Listen BEFORE Riding Off Into the Sunset!

Kid Colt's back story involved him killing the man who had murdered his dad. It was a fair fight, but the murderer had been a professional gunman, so no one believed the Kid had outdrawn him. Thus, he was marked as an outlaw and always on the run.

Kid Colt Outlaw #97 (March 1961--written by Stan Lee and drawn by Jack Keller) plays on this premise in an interesting way. Someone takes a shot at him while he's riding through a lonely patch of wilderness. The three gunmen trying to pot him are atop a nearby cliff. By climbing up the side of the cliff, out of the gunmen's field of vision, he's able to get the drop on them. 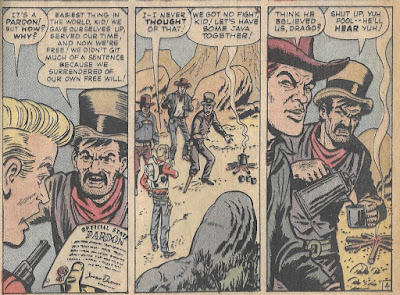 Kid recognizes on of the gunmen as Drago Dalton, a notorious outlaw. Kid would normally turn Drago into the law, but the outlaw has a pardon. He explains that he and his men turned themselves in, thus getting off easy.

This is actually one of two plot holes in the story. Kid sees the pardon and gets the idea that it might be a good idea to turn himself in and hope for leniency. That's all well and good, but he seems to have forgotten that Drago had tried to shoot him from ambush just a few minutes earlier. He doesn't demand an explanation nor does Drago offer any sort of justification. It makes sense that Drago would try to simply shoot Kid Colt before going to his more complicated plan of tricking him, but shouldn't he have had a good lie in place to explain his sniper fire? "I thought you were a deer" or something like that?

I wonder if Stan Lee managed to forget this plot point as well. Or perhaps he simply chose to gloss over it to keep the story moving. Since he was churning out many scripts per month in a number of genres at that time and must have been on autopilot to a degree, either explanation is possible.

Drago is, of course, lying through his teeth. The pardon is a forgery. His plan is to plant the idea in Kid Colt's head that turning himself in might be the best thing to do. With Colt out of action, Drago (who can outgun any of the local lawmen) can now pretty much run rampant around the territory. 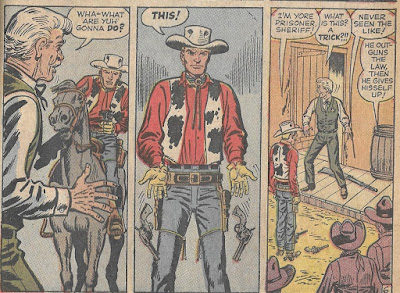 The Kid does turn himself in, but the "leniency" part doesn't work out and he's sentenced to 5 to 10 years in the slammer. Once he's in prison, he also discovers that he's a target for violence from various outlaws he caught over the years. Then his life goes from bad to worse when he learns from a new prisoner that Drago had tricked him.

He had been planning to stick it out in jail no matter what, but this last bit of information changes his mind. He makes a break over the all and--because his horse Steel has been loyally waiting for him--manages to get away.

Steel is one heck of a horse, isn't he? The time line of the story is uncertain, but even if Kid was tried immediately after turning himself in, it must cover a few weeks at least. So Steel has been waiting while still saddled all this time!

Let that be a lesson to all of us. When we heroically catch the villains/rescue the girl/save the town, hang out a few moments and listen to people before riding off into the sunset. You just might miss something important otherwise!

I do like this story, by the way. The idea of Kid Colt turning himself in and letting the law take its course is a good one and its handled well on a thematic and emotional level. The story is hurt by some weak plotting (Colt seeming to forget that he was just shot at and Steel being saddled while waiting outside the prison), but its still a good tale.

Next week, we'll finally finish up our look at Tragg and the Sky Gods.