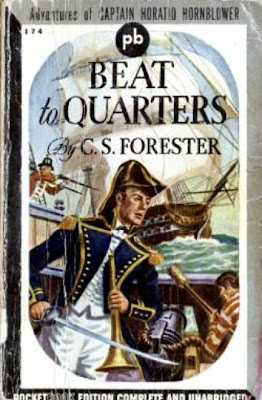 If I had to make a list of my favorite make-believe people...


Well, that list would be a little different every time I made it. But Captain Horatio Hornblower of His Majesty's Royal Navy would have a spot on it somewhere nearly every time.


Created by C.S. Forester in the 1937 novel The Happy Return (titled Beat to Quarters in the U.S.), Hornblower is a brilliant seaman who served his country during the Napoleanic Wars. He is one of the most purely human characters you'll ever meet in a work of fiction--flawed, secretly full of doubts, and emminently likeable. It's easy to believe he's a real guy, which--of course--makes the novels all that much more immersive.


Forester wrote ten complete Hornblower novels (and left an eleventh incomplete at the time of his death) and all are fast-moving adventure stories with strong plots. Forester did not write them in internal chronological order, but by the time he was finished, we can trace Hornblower's career from Midshipman to Admiral, sharing in innumberable adentures along the way.


The first novel, Beat to Quarters

, would be the fifth chronologically. Set in 1808, it has Hornblower in command of a frigate, the Lydia. He is bringing guns to an anti-Spanish rebel leader in Central America, since at the moment Spain is an ally of France and also at war with England.


He delivers his cargo to the obviously psychotic rebel leader, then uses a clever tactic to capture a large Spanish warship (the Natividad) intact. He turns this over to the rebels as well.


The Lydia sails off, with Hornblower relieved that he doesn't have to have any more dealings with the whacko rebel. But then he discovers that Spain has switched sides and is now allied with Spain. So now he has to track down the Natividad and destroy it. (He also reluctantly picks up a lady passenger--a stranded Englishwoman--with whom he eventually falls in love.)


This (the stalking of the Natividad that is, not the falling in love part) leads to an absolutely riveting battle sequence. The two ships meet in stormy seas. Hornblower's better trained crew allows his smaller ship to get in some licks, but the Lydia takes some damage as well. The weather forces the opponents apart. When they meet again, the wind has died away completely and Hornblower has to use his ship's boats to tow the Lydia into battle while under constant fire from the Natividad.


Man, it's great stuff; in part because Forester has crewed the Lydia with characters we really care about and in part because his straightforward prose and sense of pacing generates a super-high level of excitement and suspense.


I've re-read all the Hornblower books several times. Beat to Quarters is perhaps my favorite, in no small measure because it contains one of the best battle scenes ever.