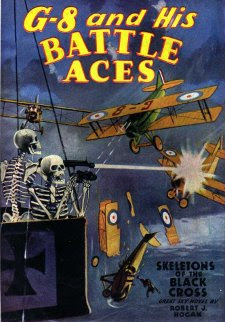 G-8 and his Battle Aces ran for 110 issues during the 1930s and early 1940s. All 110 issues--in which master spy and ace fighter pilot G-8 foils increasingly bizarre German schemes to defeat the Allies during the Great War--were written by Robert J. Hogan.
-
-
There were a lot of pulps in the '20s and '30s that featured WWI aerial combat or daredevil barnstormers. Remember that at this time, the overwhelming majority of people had never been on an airplane. So pilots and airborne derring-do still had a thick veneer of romanticism over them. Readers searching for a good adventure story were naturally drawn to the subject.
-
-
Many of the aviation pulps were set during the Great War for convenience more than any other reason--like Westerns and G-Men pulps, it gave the readers a pre-set situation in which they already knew who the good guys and bad guys were.
-
-
So when Hogan was assigned by Popular Publications to do another aviation pulp, he realized he had to come up with a way to make his stories stand out from the crowd. His solution was to make the hero a spy as well as a pilot, then to throw a seemingly endless series of science-fiction threats at him.
-
-
In the first issue, he encountered giant robot bats that spewed poison gas. Later issues involved anything from genetically-engineered giant birds to soldiers mutated into werewolves to invisible planes. Hogan, a talented and prolific wordsmith, always managed to build a fast-moving and exciting yarn around these idiosyncratic plot ideas. Frederick Blakeslee usually painted the terrific covers.
-
-
What made me write about G-8 today? Well, I just read a recent reprint of Skeletons of the Black Cross (first published in February 1936). In this one, G-8 has to deal not only with a newly invented German death ray, but with a small army of apparently re-animated human skeletons.
-
-
Skeletons with death rays. Why doesn't anything that inherently interesting ever happen in real life?
-
-
Typical of most pulp adventures, it is pure escapism--emphasizing story and action over characterizations. And that, of course, is exactly has it should be. Hogan, like Maxwell Grant (The Shadow) and Lester Dent (Doc Savage) had a talent for constructing clever plots and exciting action set pieces. He did exactly what he was supposed to do--provide his readers with a few hours of fun.
-
-
In fact, Hogan outdoes himself in this issue with one particular set piece. G-8 finds out that the Germans need a rare element to power their death ray. Stealing a German bomber equipped with six bombs, he flys out into the North Sea to intercept and blow up the submarine carrying an irreplaceable supply of the element.
-
-
What follows is a truly edge-of-your-seat battle sequence in which G-8 dogfights a half-dozen Fokkers while simultaneously dodging anti-aircraft fire from the sub and trying to make a successful bomb run. It's one of Hogan's finest moments in the series--one of those occasions where you can't put the book down until you're done with the chapter.
-
-
The story is marred a bit at the climax when the Germans pretty much act like idiots, allowing a captive G-8 to sneak away and radio for help. But even this doesn't spoil an exciting and entertaining story. G-8 isn't as famous as the Shadow or Doc Savage, but he holds a deserved place of honor in the pulp hero pantheon.
-
-
Skeletons with death rays.
-
-
Sorry, I just wanted to type that out one more time.
Posted by Tim DeForest at 9:00 AM

Email ThisBlogThis!Share to TwitterShare to FacebookShare to Pinterest
Labels: G-8 and his Battle Aces, pulp magazines