Finding Lost Civilizations Without Even Trying

A lot of adventurers have stumbled upon lost civilizations. It’s the sort of thing that adventurers tend to do.


Carl Denham, for instance, was sailing to the tropics to make a movie when he found Skull Island along with a lot of hungry dinosaurs and a lovelorn giant ape.


John Carter, Warlord of Mars, was always running across isolated cities or hidden valleys full of everything from invisible men to airborne pirates to blood-sucking plant people.


Professor Challenger—well, he actually intended to find a lost world. Pulled it off, too, when he and three companions found a nearly inaccessible plateau full of dinosaurs, then got involved in an ancient war being fought there between Indians and apemen.


I imagine most adventures would feel pretty lucky to find at least one lost civilization in their lifetimes. But there are some guys who seem to trip over lost civilizations whenever they turn a corner or stop to buy a newspaper. They just can’t help themselves.


Doctor Clark Savage and John Clayton (Lord Greystoke) both fit in this last category. I don’t think either of these fellows could avoid finding a lost civilization if they tried.


Of course, both men led life styles that made such discoveries a bit more likely than it would be for me or you.


Doc Savage, for instance, dedicated his extraordinary physical and mental skills to fighting evil and helping all those in need. And, of course, since those in need are often being stalked by mobsters with disintegration gas or murderous dwarves or the apparent ghosts of 18th Century mountain men, it’s not surprising that circumstances would from time to time lead him and his team to yet another lost civilization.


Lord Greystoke (better known as Tarzan) spends a lot of time swinging from tree to tree in unexplored jungles of Africa. And, as we all know, the unexplored jungles of Africa are pretty much overflowing with lost cities and hidden valleys---misplaced Roman cities or a city of Crusaders or the devolved descendents of the Atlantians or really small ant men or a city full of just plain crazy people.


Perhaps most incredibly, both men had not one—but TWO occasions in which they discovered (or at least visited) lands in which dinosaurs still lived.


During World War I, Tarzan was relentlessly pursuing the German soldiers who had kidnapped his wife Jane deeper and deeper into the jungle. Finally (as recounted in Tarzan the Terrible

), they all stumbled across a land called Pal-Ul-Don, inhabited by a tailed sub-species of humankind and a lot of dinosaurs. Tarzan (as he often did in similar situations) got involved helping the local good guys against the local bad guys, rescued Jane from certain death once or twice, rode a tamed triceratops and eventually—with a little help from a surprise guest star—managed to finish off the Germans. 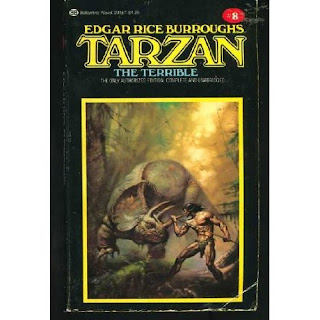 But that wasn’t Tarzan’s only run-in with prehistoric fauna. A few years later, he was part of an expedition that traveled by zeppelin through a polar opening into the underground world of Pellucidar. (This tale is recounted in Tarzan at the Earth’s Core.

) Of course, Tarzan doesn’t get credit for discovering Pellucidar—that honor went to David Innes and Abner Perry a few years before. (Their history is recounted in At the Earth’s Core

.) But Tarzan spent some time there, encountering dinosaurs galore and a race of reptile men before returning to the surface world. 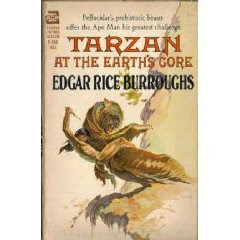 And, heck, I’d almost forgotten: There was a dinosaur or two located outside the remote city of Ashair (as detailed in Tarzan and the Forbidden City 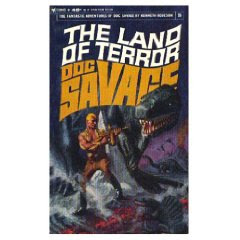 Doc Savage, in the meantime, encountered dinosaurs for the first time in The Land of Terror

(first printing in Doc Savage magazine, April 1933). The adventure initially began in New York City when a band of criminals got hold of a disintegration gas called the Smoke of Eternity and used it in a campaign of murder and robbery. But when their supply of the stuff is destroyed by Doc, they have to return to a remote Pacific island that contains the only source of an element needed to make the gas.


Doc and his men pursue, of course, only to have their plane torn from the sky by a pterodactyl. They bail out and find themselves in a dinosaur infested jungle. But they make due as they not only avoid becoming a carnosaur’s lunch, but also defeat the bad guys and make good their escape off the island.


A few years later (in The Other World

—January 1940), Doc and his team get involved in a violent feud between rival fur traders. Bizarre circumstances lead them to northern Canada and a hidden underground world lit by incandescent volcanic gas. Doc gets trapped between a saber tooth tiger and a triceratops, then later has to fight an apemen to establish dominance and rescue some slaves. Eventually, in what adds up to one of Doc Savage’s most entertaining adventures, the evil fur traders are done away with while the good fur trader gets the girl. 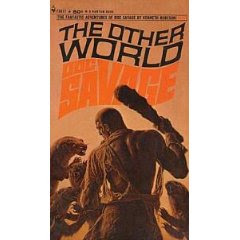 I’m tellin’ ya—it all seems so unlikely that these guys can run across dinosaur-infested lost worlds more than once that… well, I’m sometimes tempted to dismiss it all as pure fiction. But what would life be without a dinosaur-infested lost world popping up from time to time? I can only envy the Man of Bronze and the Lord of the Jungle for their incredible good fortune in this regard.