The mind boggles when you think about what the Human Resources manager at the Daily Planet must have to deal with. If you're turned into a werewolf while on the job, does this come under Workman's Comp? How about if your top girl reporter gets knocked on the head, turns evil and blackmails Superman into marrying her? Does time off for that count as Vacation time or Personal time? Does it constitute harassment? And why the heck does Clark Kent spend so much time ducking into that janitor's closet? That's not in his job description, is it? If you are turned into a baby, is the Planet suddenly in danger of violating Child Labor laws? If an employee turns into a giant turtle man and destroys most of the U.S. Navy's Atlantic fleet, is the Daily Planet liable in any way?

I think the most heroic people in the DC Universe probably work in H.R. Just look at what those poor people had to deal with.

But Mort Weisinger and his writers never worried about that. They simply tossed the Daily Planet workers into one bizarre danger after another--and consequences be darned!

Jimmy Olsen started out as a nameless copy boy back in the 1940s, but was soon given a name and became a regular part of the cast as a cub reporter. In 1954, he got his own book--Superman's Pal Jimmy Olsen. Here we discover that young Jim has become quite a skilled investigative reporter and a disguise artist. That set the stage for stories pitting Jimmy against gangsters and con artists, which was fine by itself.

But Jimmy lived in a universe ruled by Mort Weisinger, so before long he was also confronting aliens, traveling through time and frequently getting transformed into strange creatures such a werewolf, a porcupine boy, and a boy with six arms. He occasionally drank a formula that turned gave him stretching powers and fought crime as Elastic Lad. He became a member of the Legion of Super Heroes. He fought crime in the bottle city of Kandor as Flamebird. He had a watch that could emit a hyper-sonic signal that only Superman could hear. Jimmy had an awesome career as a newsman--and all before he was old enough to vote.

The Jimmy Olsen stories couldn't have been sillier and often made no sense even in the context of a comic book universe, but they were told in a straightforward manner that still allowed them to fit easily into Superman's reality. Normally, fantasy and SF stories are strengthened by having a solid internal logic. In the case of the Jimmy Olsen stories, the silliness and lack of consistent logic worked to their advantage. It wasn't a case of "turning your brain off" in order to enjoy them. Instead, the best of Jimmy's yarns become tall tales in which their absurdities are simply a part of what is supposed to happen. Jimmy is essential the Paul Bunyan or Johnny Appleseed of the DC Universe.

There's so many examples of bizarre yet entertaining Jimmy Olsen stories, it's hard to pick a typical example. I think we'll just go to the most famous example--"The Giant Turtle Man." 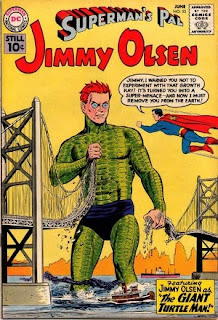 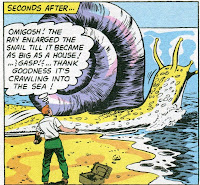 Written by Jerry Siegel and drawn by Curt Swan, this story appeared in Jimmy Olsen #53 (June 1961). Jimmy is on a vacation cruise in the Caribbean when he finds an enlarging ray in a chest washed up on an island beach. This turns out to be the first part of a trap laid by a criminal merman from Atlantis named Goxo.

Jimmy accidentally sets off the ray, which passes through a turtle before hitting him. He grows to several hundred feet in height and mutates into a giant turtle boy. Goxo then takes telepathic control of him, forcing him to destroy bridges and Navy ships, then dumping the metal scrap this creates into an island volcano. 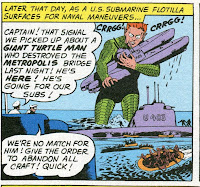 You see, Goxo was being exiled to the surface world for his crimes. He had discovered a cache of pirate gold on the island. Wanting to save this for his exile, he had to prevent geologists studying the volcano from stumbling across it. So he came up with the Giant Turtle Boy plan to clog the volcano with molten metal and prevent it from erupting. Because no geologist would be interested in studying an artificially clogged volcano.

Superman is on a mission in space during the initial part of Giant Turtle
Boy's rampage, but he soon returns to put a stop to it. Mermaid Lori Lemaris explains Goxo's evil plan and everything is now apparently all right. Well, the Navy has lost several hundred million dollars worth of warships, but no one mentions that. Maybe that pirate gold was used to pay for them? Maybe the Daily Planet just has really good insurance?

Well, Goxo's plan is just a tad bit absurd. (Its main failing is depending on whomever finding the ray being 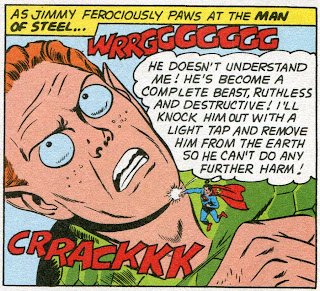 clumsy enough to use it on himself.) But that's okay, because Goxo is a crook and we can assume he's just nuts.

As for the story's other inconsistencies in logic--well, like many of the Jimmy Olsen stories, the story is told in such an unpretentious and convivial manner, that it's impossible to complain. You find yourself simply accepting everything that happens at face value and enjoying the tall tale for what it is. If an insane merman criminal wants to leave an enlarging ray on the beach as part of his plan to recover pirate gold, then that's just fine by me. The world can never have enough of that sort of thing.


I was going to review a Lois Lane story in this post as well, but I've droned on about Jimmy far too long. So we will end our systematic look at the Weisinger-era Superman universe next week when Lois really gets on the Man of Steel's nerves by... being ethical?