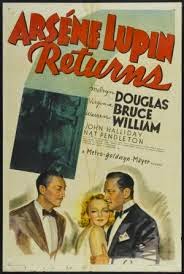 Arsene Lupin Returns (1938) is the direct sequel to 1932's Arsene Lupin, though the now-retired Gentleman Thief has transformed from John Barrymore into Melvyn Douglas.

I'm okay with this, though, since Douglas is really good in the part. We find him working as a Gentleman Farmer in France, apparently retired for good from criminal enterprises. He's now using the name Rene Farrand. The police aren't looking for him otherwise, presuming he's dead after jumping off a Paris bridge at the end of the last film. He's also in love with the beautiful Lorraine de Grissac, played by Virginia Bruce (who is indeed pleasant to gaze upon). Life is good.

Or perhaps not so good. His quiet life is interrupted when a valuable emerald is stolen and Arsene Lupin's calling card is left behind. Lupin/Farrand is being framed and it might in the end be necessary to employ his old skills as as thief to prove he isn't a thief.

Warren William co-stars as an American insurance investigator who soon suspects Lupin's real identity. This leads to an odd circle of suspicions held by various characters. William thinks Lupin actually is guilty; the police inspector (George Zucco) suspects William of being guilty; Lupin knows he's innocent, but at one point he has to tell a couple of old colleagues that he's guilty in order to trick them into helping him prove his innocence. Along the way, a fence who briefly had the emerald is murdered. Lupin now has to clear himself of murder rather than just thievery.

It's a potentially convoluted plot, but a good script and straightforward direction by George Fitzmaurice keep the story on track. The one weak point might be that we (the audience) are meant to doubt Lupin's innocence ourselves, but it's really no spoiler to tell you that there's never any doubt that he's the good guy this time around.

The cast is great. I've already mentioned that Douglas slips into the role quite nicely. Warren William 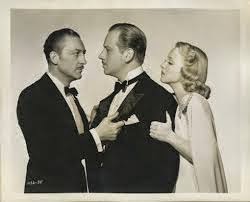 is excellent as the American detective--though he is wrong in his initial suspicion of Lupin, it's clear all along that he's intelligent and capable.

In fact, that's one of the strengths of the film. Even when William or policeman Zucco are wrong in their suspicions, those suspicions are reasonable in of themselves. They are smart and professional investigators, making them worthy opponents for Arsene Lupin. 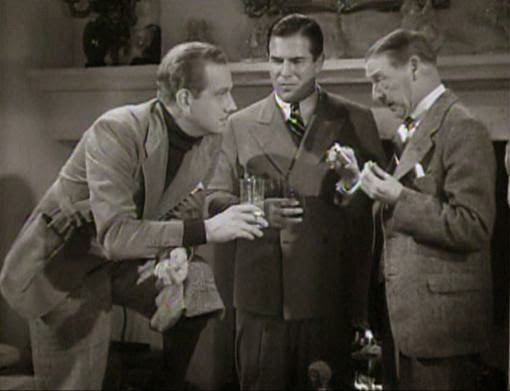 Two other notable cast members are E.E. Clive and Nat Pendleton as two of Lupin's former colleagues from his days as a thief. Readers of my blog know how much I like the character actors from the 1930s/40s/50s. Seeing these two guys apparently having fun with their parts is an added pleasure for an already entertaining movie.

That's it for the Lupin films, though I would have loved to see more sequels in which Lupin and William's characters teamed up to solve a few more crimes. Sadly, that never happened.

But Warren William did get a chance to jump to the other side of the fence a year later when he began playing the Lone Wolf, a yet another former thief who must often play detective to clear himself of murder. So perhaps this film was good practice for him. Ironically, Melvyn Douglas had played the Lone Wolf in a movie in 1935.  The Gentleman Thief turned Detective was a common archetype back in the day. Which was a good thing, because we got quite a few great movies out of this.

As for what's next for the movie portion of the In Order series--I think we'll continue to hang around Warren William for awhile and see how he did as Perry Mason in four films.