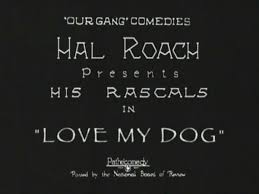 If you love dogs (and who doesn't love dogs--because they're awesome and not cats), then a particular Our Gang short is required viewing for you.

For many of us, we more readily think of these shorts as The Little Rascals, because that's the name used when they were syndicated on TV and that's how we grew up knowing them.

The series began in 1922 and was produced at Hal Roach's studio and originally distributed by Pathe', an independent film distributor that was around during the 1920s. It lasted for two decades, with regular cast changes as child actors kept annoyingly growing up. Those of us who were introduced to them on television are most familiar with the Spanky & Alfalfa shorts made in the 1930s, because those were the ones most often shown.

By the way, Roach sold the series to MGM in 1938, but later bought back many of them and repackaged them for TV. The legalities involved in this is why they became The Little Rascals when they appeared in the new medium.

Anyway, 1927's two-reeler Love My Dog is one I never saw as a kid and only recently saw as a grown-up. Gee whiz, it's wonderful. 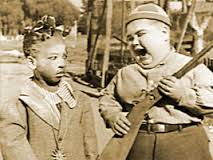 The Gang at the time included Farina (Allen Hoskins) and Joe (Joe Cobb), who pretty much take the lead in this one. Farina befriends a homeless and hungry mutt, only to find out that the local dog catchers are on a jihad to catch and put to sleep any unvaccinated canines.
One of the strengths of the Our Gang series throughout its run is that the kids acted like kids. Yes, it was in an exaggerated, comedic manner--but you never had any problem accepting them as real children. This was something that added both to the comedy and the heart of the series.

So when the kids in Love My Dog come up with desperate plans to protect their dogs that involve disguising them as other animals, we have no problems running with this. In our minds, these are real kids, so that means the dogs are real dogs in real danger. The balance between silliness and a sense of real danger is perfect.

Farina's poor dog has quite a day. He helps rescue other dogs out of the dog catcher's wagon (the dog catchers, by the way, are cartoonishly evil) and pauses to rescue a toddler from the ledge of a tall building. But he is himself caught and taken to the pound to be gassed to death, the Gang has to very quickly raise the $5.00 needed to save his life. Will they make it?

This is a funny, thrilling, and ultimately touching comedy short.

Email ThisBlogThis!Share to TwitterShare to FacebookShare to Pinterest
Labels: Our Gang