The Most Dangerous Dinosaur Game 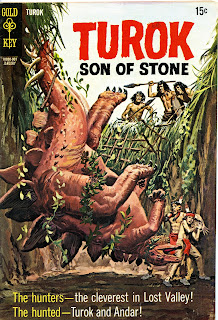 The cliche of the good guys being hunted as prey by the villains has been used in many different stories. I wonder if Paul S. Newman was consciously harking back to Richard Connell's "The Most Dangerous Game"--the origin of this idea--or if it was so common by 1970 that you didn't need to reference or even know about that story anymore to do your own take on it.

"The Hunted" is from Turok, Son of Stone #68 (January 1970). Turok and Andar encounter a tribe that uses clever and bold tactics to lure dinosaurs into pits and kill them for meat. But Andar puts his foot in his mouth when he brags he and Turok are the better hunters. 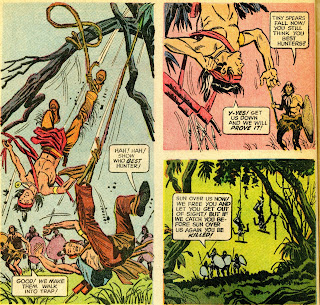 This is unwise. The pair soon end up in a trap and their bows and arrows are taken from them. The tribe plans to hunt them down. If they are caught, they'll be killed. If they survive until sunrise the next day, they get their weapons back and will be allowed to leave the area.

I love a moment that follows when Andar begins to wish they hadn't come into this area. Turok simply replies "We did and we are here!" It is what it is, Andar. Deal with it. It is moments like this that help make Turok one of my favorite comic book characters. 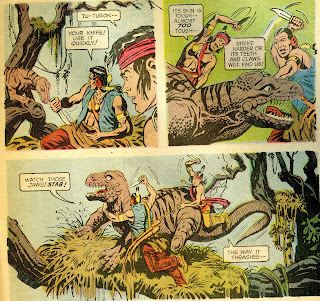 The story becomes a cat-and-mouse game with the hunters and the hunted both using clever tactics to try to outwit one another. At one point, Turok and Andar take to the trees so they won't leave a trail, but an encounter with a tree-climbing dinosaur ruins this idea.

The story construction here is excellent. The hunters may be from a more primitive society than Turok, but they are indeed great hunters. The various moves and counter-moves attempted by both sides is exciting and tense.

The heroes manage to lose the hunting party for a time, but end up falling into one of the dinosaur pits. Here, luck turns in their favor. A stegasaurus falls in soon after and is speared by a couple of tribesmen who don't know the Indians are also down there. This allows Turok and Andar to get a couple of spears. Not as good as their bows, but better than nothing.


But the hunting party is closing in on them again. Turok has one last plan: Kill a pair of baby triceratops and use their skins to hide in plain sight.

It works, though its impossible not to feel sorry for the poor baby dinosaurs. If only Giolitti hadn't drawn them to look so darn cute! 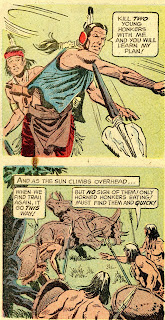 The sun rises with Turok and Andar still free. The tribe keeps their end of the bargain, but Turok is gracious in victory and does acknowledge they are the best hunters he's ever seen.

"The Hunted" is a great story, taking a well-used premise and executing it superbly in terms of good storytelling--while never forgetting that the best stories involve clever heroes trying to defeat equally clever enemies.
Posted by Tim DeForest at 9:00 AM