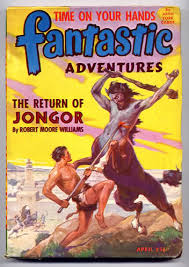 When the first Jongor novella ended, the titular hero was accompanying Ann and Alex Hunter out of the dinosaur-infested Lost Land back to civilization.

But life is never that straightforward for pulp heroes. "The Return of Jongor" (first published in the April 1944 issue of Fantastic Adventures) quickly sees Ann and Alex captured by Aborigines at the outskirts of Lost Land. Two more men--Schiller and Morton--are also prisoners.

With a little help from a dinosaur, Jongor rescues them all. But further trouble arises when some Murtos attempt to lure Jongor into a trap. The Murtos, remember, are the monkey-people from the previous story--the degenerate remnants of a dying civilization that Jongor destroyed while rescuing Ann. So they are rather upset with our hero and determined to finish him off.

After a kidnapping, an escape and a run-in with a whopping big lion, Ann ends up in the city of the Arklans, a race of centaurs who are also the remnants of a dying civilization. The Lost Land is turning out to be a sort-of dumping ground for moribund pre-human races.

Jongor and his allies act to rescue Ann, but are soon helping Nesca, the queen of the Arklans, escape from assassins. This task is made more difficult by the fact that Nesca doesn't necessarily want to be rescued. Also, Schiller and Morton might not be as trustworthy as their allies would wish them to be.

The same weaknesses inherent in the first Jongor story are still here. Robert Moore Williams is still annoyingly vague in his descriptions of everything. For instance, I still don't know what species of dinosaur Jongor is supposed to be riding. The Arklan city is described in a few short paragraphs, giving us enough information to follow the action but without details that lead us to accept the centaur civilization as something real.

On the other hand, Williams' basic ideas are still pretty cool and the story's brevity continues to hide some of the more egregious faults. 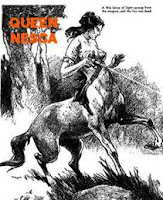 Also, there are several parts that are downright awesome. Ann's single-handed escape from Murtos about halfway through the story is edge-of-your-seat tense, while Nesca's decisions late in the story regarding her personal fate and the fate of her entire race are dripping with surprisingly real emotion. 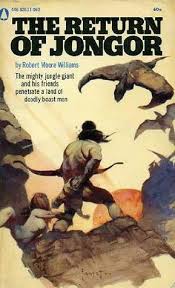 "The Return of Jongor" has enough good ideas for a solid novel-length story, I think Williams' mistake was writing a novella instead of fleshing out both the plot and the descriptive passages. The story sometimes has the feel of an outline for a more in-depth tale.


All the same, "The Return of Jongor" is entertaining. We'll see if Jongor continues to entertain us when we take a look at Jongor's final adventure.