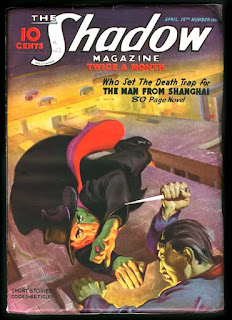 In many of Walter Gibson's excellent Shadow novels, the identity of the main villain is unknown--the revelation of that identity is often a part of a massive plot twist at the end of a story.

So when I write about a Shadow novel, I often have to take care in how I summarize the plot so I don't include spoilers. 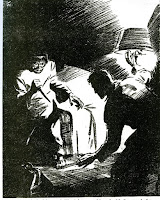 But in The Man from Shanghai (published in the April 15, 1936 issue of the Shadow Magazine), that's not a problem. I can scream the name of the villain (Kenneth Malfort) from the rooftops. I can freely explain his plans: Malfort knows about a guy arriving in New York from Shanghai with the intention of selling valuable jewels to raise money for the Chinese government. The villain knows the potential buyers--he's having them murdered and robbed individually before going after the jewels themselves.

None of that's a secret. We meet Malfort in the very first sentence and fully understand why he's having people murdered soon after that. We know a gang leader named Spark Ganza is suppling him with thugs when needed and that he has a mute, knife-wielding Mongol assassin named Ku-Nuan at his beck-and-call.

This is because Walter Gibson took a nifty approach to this particular story. Tension is generated because we know what Malfort is planning and we know what the Shadow is planning to counter Malfort's plot. But neither of them know the others plans with complete certainty, so following their plots and counter plots as both work from incomplete information is fascinating. 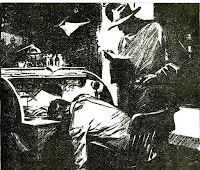 The Shadow picks up a clue at the scene of the latest murder, helping him to figure out who the next victim will be. He takes the victim's place and encounters Ku-Nuan in a desperate knife fight, allowing the assassin to escape afterwards in hopes that he'll leave a trail to his boss.

But Malfort instead uses Ku-Nuan to lure the Shadow into a trap involving not just the assassin, but a bunch of Spark's men armed with tommy guns.


The Shadow thinks and fights his way out of that trap, then foils another murder attempt, thinning out Spark's gang along the way. In the meantime, he sets up himself in the guise of Lamont Cranston as the next potential victim to spring a trap of his own. 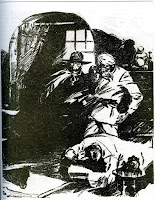 Malfort theorizes that Cranston actually is the Shadow and makes plans of his own. In one of Gibson's best plot twists ever, Malfort tries a surprise gambit that he set up before the novel began. This is the one part of his plans that readers aren't privy to, though the gambit is set up earlier with a subtle Chekhov's Gun--so Gibson is still playing fair with us.

The gambit leaves the Shadow a prisoner, with Malfort still plotting more murders and thefts.

But keeping the Shadow a prisoner is never a good idea...

Also, never underestimate what an elderly and nearly blind butler can accomplish in the name of justice.

The Man from Shanghai is a classic Shadow adventure, with several memorable villains carrying out a ruthless but effective plot. The idea of jumping back and forth between hero and villain, "watching" them as the try to out-think each other, gives the novel a unique flavor. Added to that is a wonderful action scene in which the Shadow must break out of an apparently perfect death trap. Of course, the Shadow does that sort of thing all the time, but it's something that never gets old. 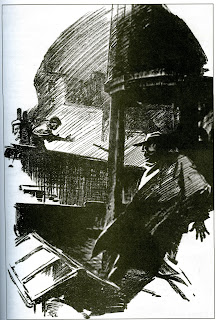