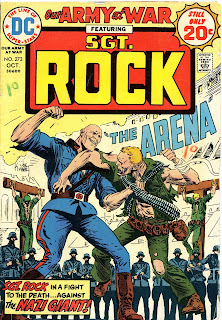 Our Army at War #272 (October 1974) features Sgt. Rock in a story titled "The Arena." It's a very simple story in terms of plot, but is thematically interesting. Mostly, though, it gives Russ Heath an unusual setting to really show off just how awesome an artist he is. 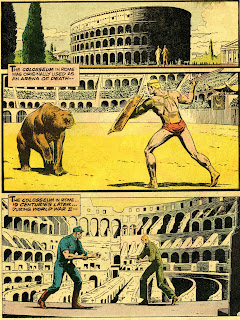 The plot really is very simple. Rock is captured by the Germans outside of Rome. He escapes when he's brought into the city, hides out in the Colosseum and plays cat-and-mouse with the Germans. Parallel to this are flashbacks to the adventures of Rufus the Gladiator (I really wish Bob Kanigher had named him Spartacus), who is tossed into the Colosseum to fight after leading an unsuccessful revolt. 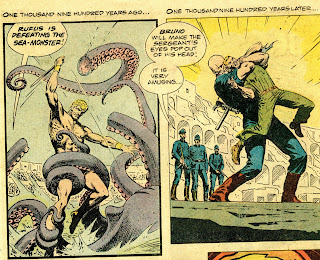 So we have two men--2000 years apart--fighting against oppressive conquerors in the same spot. Things end badly for Rufus, but Rock gets literally pulled out of the fire by Easy Company in the nick of time. 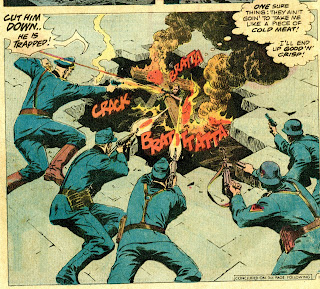 But the strength of the story here is the artwork. Using the Colosseum as a setting and allowing flashbacks to the days of the Empire allows Russ Heath to shine. Nearly every panel is riveting and a pleasure to simply look at--great figure work highlighted by perfect compositions.