I wrote about a Three Mesquiteers film only a month or so ago, but we're going to visit another of them today. This is in part because a B-movie group I run on Facebook has generating a number of posts and comments, inspiring me to watch them. But also because I'd like to talk about the inherent weirdness of when the heck theses movies are set. 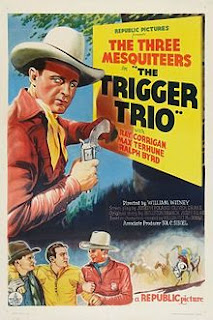 In the universe of B-movies and serials, the Wild West remained wild right up until what was then "modern day." There are still cowboys, cattle drives, Indians and six-shooters. But there's also automobiles, telephones and radios. Heck, Mesquiteer films made in the 1940s had them fighting Nazis. So a 1937 entry like The Riders of the Whistling Skull was obviously set in 1937, despite the Old West trappings.

I'm fine with this. It's a universe in which the West remained the way it should be, even while some elements of modern society slowly snuck in.

But other entries in the series, such 1938's The Night Riders (the movie I reviewed last month) are clearly set in the 19th Century. The Night Riders' plot revolved in part around the 1881 assassination of President Garfield.

The movie we are looking at today--1937's The Trigger Trio--is another one set in then-modern day. The plot involves an outbreak of hoof-and-mouth disease among the local cattle. The Mesquiteers are deputized to enforce a quarantine at the state border and are stopping 1930s model cars and trucks. The movie is still a Western--both heroes and villains more commonly ride horses and nobody pulls out a Tommy gun during the final shoot-out--but it's definitely set in the '30s.

The movie is an excellent entry in the series. It's the first one not to feature the usual three main characters. Robert Livingston, who was playing Stony Brooke at the time, went swimming with co-star Ray Corrigan and bumped his head on a rock. That laid him up for a month. 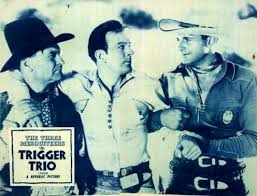 So Ralph "Dick Tracy" Byrd was brought in. The script mentions that Stony is down in Mexico and introduces Byrd as Larry Smith, the brother of Corrigan's character Tuscon.

It's fun to see Byrd, whom I'm most used to playing straight-laced authority figures like Tracy, take on the role of a hot-headed younger brother. And having a hothead in the cast is a strength for this particular story. The villain is a rancher whose cattle first contract the disease. He changes the brand of the sick cattle and sneaks them into someone else's herd. He also murders an agricultural inspector to keep his secret.

Larry, meanwhile, is annoyed that his older brother is so strict about upholding the law and enforcing the quarantine. He ends up unwittingly helping the murderer when he agrees to help with an illegal cattle drive to get the beef to market across the state line.

But when the villain's identity is revealed, Larry rejoins the other Mesquiteers and acquits himself well.

Like many of the early Mesquiteer films, this one is in the public domain. You can watch it here:

Were the Three Mesquiteers immortal, destined to fight evil through all eternity? Do the films set in then-modern day involve the identical sons of the original 19th Century Mesquiteers? Or (and this is my preferred interpretation) are there two (or possibly three) parallel universes involving multiple sets of Mesquiteers who were born in different generations?

Let's go with this last one, which means we have at least two universes. One is the traditional mythic Old West. The other is the B-movie universe's modern West, in which time stood partially still for the last generation or two. Either universe is a good setting for entertaining Westerns, so I'm happy that both have a version of the Three Mesquiteers riding around.