The Return of Lee Chan--Part 2 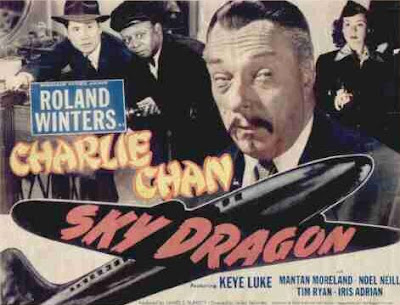 It was the end of the era. With 1949's Sky Dragon, Charlie Chan's career as a B-movie detective comes to an end.

It's an honorable end, though. Sky Dragon starts out with Chan and his son Lee on a passenger plane. When the crew and most of the passengers are knocked out with drugged coffee, Lee (who is training as a pilot) is able to keep the plane in the air until the crew wakes up. 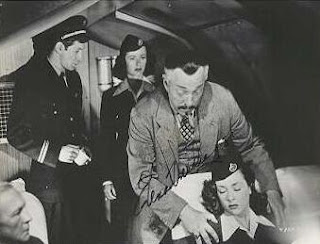 But not everyone wakes up. A man guarding a large cash shipment has been knifed to death. The cash is gone and no where to be found--presumably dropped overboard by the killer with a parachute.

So the killer/thief has to be someone on the plane--someone who also drank some drugged coffee after committing the crime to cover his/her tracks. When the plane lands in New York, the local cops naturally ask Chan to help investigate.

The chief New York homicide cop, by the way, is played by Tim Ryan, one of those skilled character actors from the Studio Era that had a talent for playing tough cops and often got these roles. In a nice bit on continuity, this is his third appearance in the the later Chan films playing the same character.

In fact, the supporting cast as a whole makes the film a lot of fun. Included here is Noel Neill as a stewardess on the plane--a role she played between appearances as the first live-action Lois Lane in the two Superman movie serials. The plane's pilot is Milburn Stone, a few years before he moved to Dodge City in the Old West and took up medicine. Lyle Talbot is a passenger with a shady past who becomes a chief suspect.

The mystery is a good one and, relative to a Charlie Chan film, unfolds realistically as Chan and Lee do a lot of plodding footwork (shown as a brief montage) to track down some needed clues. But Chan gets to show off his brilliance as well--the climax back aboard the airplane has him pulling off several successive cons on various suspects to trick them into giving themselves away. 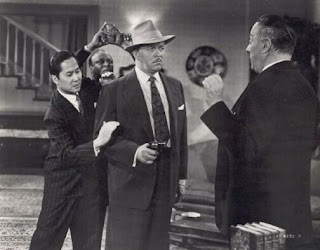 I am so glad that Keye Luke returned to the series in time to give us a few more visits with Number One son. Lee has matured a little, though he's still in many ways the son eager to please his dad. I don't know if Roland Winters knew the series was coming to an end, but he noticeably turns down the sarcasm he normally directed towards his kids and let us know that, in the end, Charlie Chan is a man who loves his children and takes pride in who they are.