Tales of the Pony Express, Part 1

The Pony Express didn't last long. Operating from April 1860 to October 1861, it soon disappeared when intercontinental telegraph lines were strung.

But while it lasted, it served a real purpose, getting letters, messages and newspapers from one coast to another in just 10 days. Buffalo Bill Cody (before he was Buffalo Bill) was an Express rider. 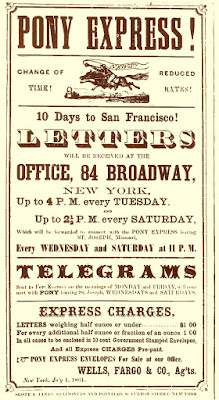 After it faded away, the Pony Express became a part of the romantized history of the Wild West. It's not surprising that when Westerns were at the top of the popular culture pyramid, stories about the Pony Express made their way to various media, including comic books.

Four Color #829 (August 1957) was Dell Comics' attempt to introduce a Pony Express character as a regular character in their line. Like Indian scouts Lee Hunter and Reb Stuart, whose adventures first appeared in Four Color that same year, Pony Express rider Craig Garrett didn't catch on sufficiently to get his own title, but appeared in a total of four stories contained in two issues of Four Color before fading away into Pop Culture Limbo.

We'll take a look at all four of Craig's stories over the course of the next month or two. As usual, I'll alternate these with other comic book reviews to maintain variety.

Both the stories appearing in FC #829 are tentatively credited to Dan Spiegle and it does look like his work to me. The writer is uncredited.

Craig's premiere adventure is "A Letter from Lincoln." The story is actually a bit contrived in setting up its premise, since it involves incredibly poor planning on someone's part.

Way out in Nevada, war between settlers and the Paiute tribe seems inimate. When a calvary officer is seen talking to the Paiute troops, the local commander assumes he's a traitor.

The officer explains that he's on a secret mission from President Lincoln to negotiate a peace. But the only other person who can confirm his story was recently killed. So the poor guy is sentenced to be executed by firing squad.

That really is contrived. Why an attempt to make peace is something you would keep secret from the local military commander is unexplained and inexplicable. 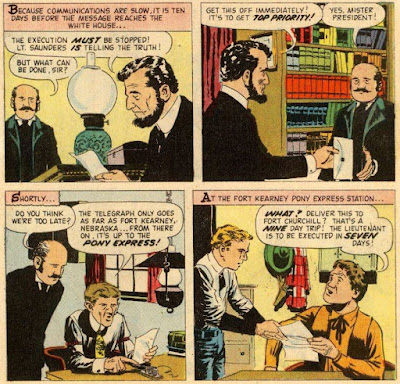 But if you just go with this, the rest of the story is excellent. There are no telegraph lines in place to the fort yet, so by the time word gets back to Lincoln, there's only a week left before the execution. But it's normall a nine-day trip to get a message back. Someone needs to ride like the wind and cut two days off that record. 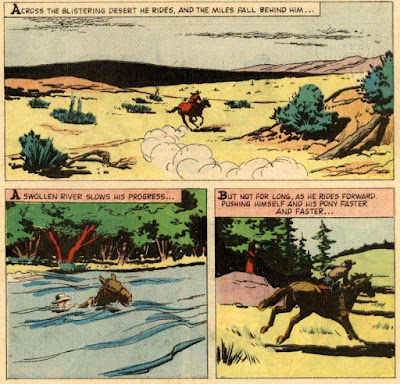 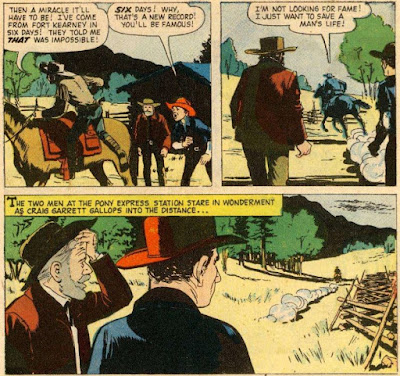 And so we are introduced to Craig Garrett, one of the Pony Express' best riders. He takes the challenge and we are treated to several pages of an exciting and beautifully illustrated montage of Craig's lightning ride across the continent. 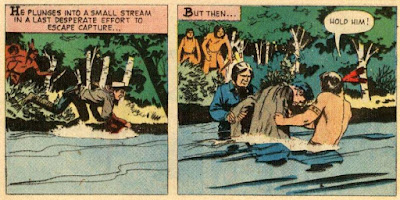 But when he is approaching his goal, things start to go wrong. His horse goes lame and he's soon captured by the Paiutes. But here we learn that Craig is as quick a thinker as he is a rider. Employing some off-the-cuff diplomancy, he gets the Indians to release him AND give him a fresh horse. He arrives at the fort in the nick of time to stop the execution and peace with the Paiutes is soon negotiated. 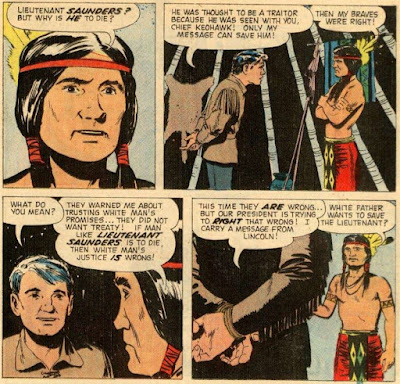 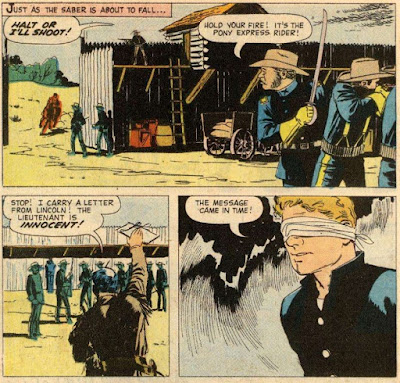 Despite the contrivance necessary to get the story started, "A Letter from Lincoln" is a strong start for Craig Garrett's all-too-brief comic book career. The art is excellent. The exchange of dialogue between Craig and the Paiute chief is effectively and realistically written. The last-minute reprieve regarding the execution might be cliched, but it is well-paced and well-drawn.

You can read this issue online HERE.

We'll return to Craig in a couple of weeks. Next week, we'll jump over to Africa for a visit with Tarzan in a story adapted from a radio serial.