The Last of Elak 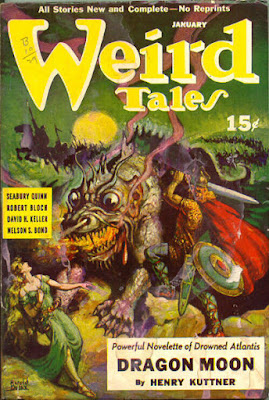 There was a three year gap between Henry Kuttner's first three Elak of Atlantis stories and the last one. "Dragon Moon" is a novelette first published in the January 1941 issue of Weird Tales magazine. It scored a nifty if not entirely accurate cover illustration as well.


It was worth the wait. "Dragon Moon" is arguably the best of the four. In any case, I think it can be definitely said that the two longer stories--the first and the last ones--are superior to the shorter ones.


Also, I had been wondering about the internal chronology of the tales. The first ended with Elak saving his brother's throne and ending up with a lady who looked to be his One True Love. The two following stories, in my mind, seemed to take place before this, when Elak was wandering around having random adventures and meeting a different girl in each one. The internal chronology didn't really matter, but it's the sort of thing I'm required to think about by the National Geekiness Over-Analyzing Fiction Act of 1978, passed by Congress that year and signed into law by Jimmy Carter.

Anyway, this last story is clearly set after the first, since it references the events of that previous entry. But Elak's One True Love isn't around or even mentioned. In fact, the story begins with Elak getting into a brawl over a tavern maid.

So there's no denying it. Elak--the dog--is a love 'em and leave 'em kind of guy. Oh, well. At least he's good with a sword and tends to defeat evil beings on a fairly regular basis. 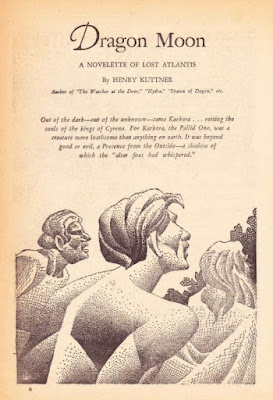 Elak is saved from being skewered during the brawl by Dalan, a Druid wizard who was one of his allies in the early novelette. But Dalan isn't saving Elak just to be a nice guy. He has a job for the wandering swordsman.

Elak, remember, is royalty from the kingdom of Cyrene. But the king of a neighboring country has been possessed by a being of cosmic power--a creature beyond good and evil who is now using his puppet body to form an army and invade Cyrene. The creature tried to possess the king of Cyrene as well, but that king (Elak's brother) killed himself rather than allow this to happen.

The villian is very Lovecraftian, which is not surprising. Kuttner was a member of the Lovecraft Circle--those writers who corresponded with Lovecraft and often added stories to Lovecraft's Cthulu-verse. In fact, it is easy to consider the Elak stories as being set within Lovecraft's continuity, though I don't think there was a deliberate intention to do so.

So Elak is asked to head home and lead an army against the invaders. He doesn't want to and, in fact, refuses at first. But a barely thwarted attempt by the cosmic being to take over his mind convinces him to take action.

He and his perpetually drunken sidekick, Lycon, find a ship heading in the right direction. It might have been preferable, though, if the ship's captain had not been the guy Elak fought in the tavern brawl. He and Lycon soon find themselves working as galley slaves.

That situation requires an escape and incitement of rebellion among the other galleys slaves. Then a telepathic message from Dalan puts Elak on the track of the one person who can help them defeat the villain. That person is the villain's mom, who also happens to be the daughter of a god. 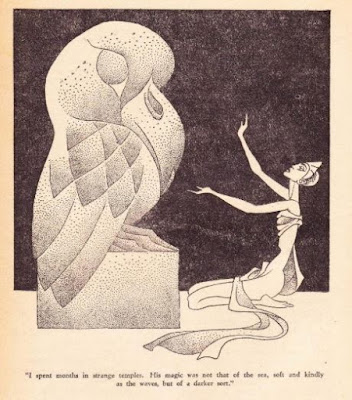 All of this leads to an epic battle and the requirement of a goddess to make a profound sacrifce in order to provide Elak with a particular talisman at just the right moment.

This last Elak tale is exciting, full of the vivid other-worldy imagery that was the main strength of the series. The plot is solid and internally logical and both Elak and Lycon are great characters. It's too bad Kuttner never returned to those characters. Elak and Lycon undoubtably had a lot of unrecorded adventures.

Email ThisBlogThis!Share to TwitterShare to FacebookShare to Pinterest
Labels: Elak of Atlantis, In Order, pulp magazines