The first time I tried to read John Tunis' 1943 novel Keystone Kids, I was maybe seven-years-old. The book is about two brothers who play shortstop and second base for a minor league team in Nashville. Second base was sometimes called the "keystone" base. The boys, Spike and Bob Russell, work in perfect tandem while turning double plays and become known as the Keystone Kids.

Anyway, I didn't finish it at that time. Not that it was too difficult for me. I was as brilliant then as I am now and often read above my grade level. But early in the book, the Kids are called up to play with the Brooklyn Dodgers. There's a scene in a train dining car where its explained to them that they can just sign the check for their meals and don't have to themselves pay.  To my seven-year-old mind, that made adult life seem frighteningly complicated, so I gave up on the book.

At least, that's the way I remember it. It's a pretty good story, so I'm just going to run with it.

But, whatever my reason for leaving Keystone Kids unfinished, I did not choose wisely. Like all of Tunis' sports books, it's a wonderfully exciting story. 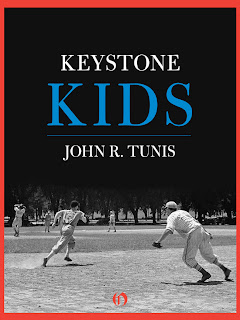 Kids is actually the third of eight books Tunis wrote about a fictionalized version of the Dodgers, with many of the same characters appearing throughout the series. This one introduces us to Spike and Bob for the first time. The Dodgers are having a rotten year when they first come up, though the two of them field and hit well. They get a better contract when they return for the next year, but the team is divided into cliques and factions that keep them from playing effectively.

When the Dodgers hit last place, Spike is surprised to find he's been made manager. Despite his youth, the team owner appreciates Spike's intelligence and determination to win.

At first, he brings the team together and they win a couple of games. But then the rookie catcher gets on the bad side of a veteran outfielder. And that's bad--because the young catcher is Jewish. Soon, he's the target of antisemitic taunts from both his teammates and from the players on other teams. His play begins to suffer and the team once again loses cohesiveness and begins to drop games. Spike wants the players to lay off, but even his brother Bob takes sides against the catcher.

It's here that the book goes from being fun to being downright fascinating. Throughout the book, Tunis give us solid characterizations and play-by-play description of games that builds up a remarkable level of tension. But now, all of a sudden, the story is dealing with prejudice and its effect on a young, scared rookie. All of a sudden, baseball is a backdrop for deeper issues. Four years before Jackie Robinson broke the color barrier in baseball, John Tunis was already showing us that the game could be an important part of making the United States a true melting pot.

And this is all done without making the descriptions of the games themselves any less engrossing:

"The ball was to Spike's right, the hardest ball the shortstop has to handle, the test of a great infielder. It all had to be done fast, too, the stop, the recovery, the throw. He got down to it and stayed down the way older men never could; he went down and nailed the ball. Picking it up from the ground and throwing it was one continuous motion, a quick underhanded snap which Bob from years of experience timed perfectly." 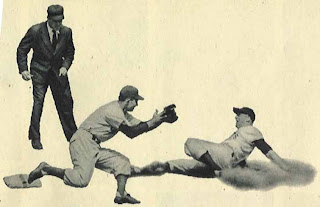 For that matter, let's quote Leo Durocher: I'd trip my mother. I'll help her up, brush her off, tell her I'm sorry. But mother don't make it to third.

Actually, let's not quote Leo after all.