Thieves, Protoplasmic Monsters and Hounds from Before Time 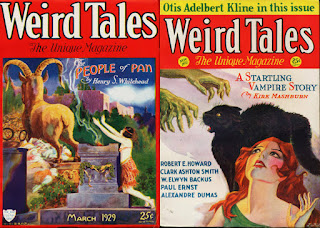 Last week, we looked at H.P. Lovecraft's novella "The Whisperer in Darkness" and mentioned that Lovecraft included a couple of shout-outs to the horror stories of other writers, effectively making those stories a part of the Cthulhu mythos.

This led me to read both those stories, because it would have been literally impossible for me not to read them.

Frank Belknap Long's short story "The Hounds of Tandalos" appeared in the March 1929 issue of Weird Tales and is impressive in how effectively it generates an atmosphere of horror in such a relatively short story.

The first-person narrator is asked by a guy named Chalmers (who has "the soul of a medieval ascetic") to participate in an experiment. The narrator is reluctant to do so, because he thinks the idea is insane--Chalmers wants to take a mind-expanding drug while concentrating on complex Einsteinian mathematics. This, he thinks, will allow his mind to travel back through time. He wants the narrator to write down whatever Chalmers observers.

Well, the experiment works--or perhaps Chalmers is just vividly hallucinating: "All the billions of lives that preceded me on this planet are before me at this moment. I see men of all ages, all races and colors. They are fighting, killing, building, dancing, singing. they are sitting about rude fires on lonely gray deserts, and flying through the air on monoplanes." Real or not, Chalmers provides us with some awesome imagery.

But then he goes back before life existed--only to discover that some sort of perverse life is there at the beginning of time: "All the evil in the universe was concentrated in their lean, hungry bodies. Or had they bodies? I saw them only for a moment; I cannot be certain. But I heard them breathe. Indescribably for a moment I felt their breath on my face. They turned towards me and I fled screaming."

These were the Hounds of Tandalos--the source of all that is evil in our universe. Chalmers is terrified that they might follow him into the present and enter our world. The narrator at this point, deciding that Chalmers is now completely off the deep end, leaves in disgust. But later events may just prove that Chalmers had reason to be scared...

You can read the story HERE.

Clark Ahston Smith's creation--the evil god Tsathoggua--also gets a mention in Lovecraft's story. "The Tale of Satampra Zeiros" was published after "The Whisperer in Darkness," appearing in the November 1931 issue of Weird Tales. But Lovecraft and Smith were regular correspondents. Lovecraft got to read the story before it was published and loved it.

There's a lot to love. Despite being a very effective and creepy horror story, Clark's story has a lot of humor in it. The story is set in Smith's Hyperborean cycle--a time before recorded history similar to the Hyborian Age that Robert E. Howard would create for Conan.

The title character is also the narrator, who claims that he and his partner are the best thieves in the world. One of the fun things about the story is that you can debate just how good these guys actually are at their chosen profession. Zeiros recounts some details of several amazing jobs they pulled off in the past, but at the moment they are broke. They spend their last few pennies on wine instead of bread because getting drunk will supposedly give them inspiration for their next job. So are they great thieves temporarily down on their luck, or are they mediocre thieves with delusions of grandeur?

In either case, they decide their next job will be to loot a city that was abandoned centuries ago and reputed to be a place of evil. Since the city was abandoned in a hurry after a prophesy warned the population to flee, the thieves figure there's likely to be a lot of valuables left behind.  They don't stop to wonder why no one had ever looted the supposedly empty city in the past.

The monster they inevitably meet is a protoplasmic creature that grows out of a basin full of thick liquid and pursues them relentless through the jungle surrounding the city and then back into the city once again. There is simply no escaping this thing and getting away with one's life will not be an easy task.

Like Lovecraft, Clark had a infallible skill at choosing just the right words and sentence structures to make his stories beg to be read aloud. The drawback to this, of course, is that you pretty much have no idea how to pronounce any of the names. And, no matter how smart and well-read you are, you will have to stop to look up word meanings at least a half-dozen times. None of this distracts from the fun of reading his stories, though. In fact, it enhances that fun.

"The Tale of Satampra Zeiros" is, like Long's story, very short but still very effective in generating the proper atmosphere. Where Long went for pure horror, Clark accomplished even more in that he inserted humor without lessening the horror. I have read a lot of Clark's stuff over the years, but this is one of my favorites.

You can read this story HERE.
Posted by Tim DeForest at 9:00 AM