Where the Buffalo (and the Dinosaur) Roam


It was a rare Turok cover that didn't have a dinosaur on it. Turok, Son of Stone #69 (1970), though, prominently features a buffalo. But what does this modern animal doing in a story set in a lost valley full of prehistoric creatures?

That's what Turok and Andar want to find out. A fight between a pair of carnosaurs drives them into a cave, where they notice a cave painting of a buffalo. That means one of the cave tribes that live in the valley must have actually seen a buffalo once. That means the buffalo somehow found its way into the valley, which might mean there's a way out.


Tracking down the tribe that painted the image, though, proves to be a bit tricky. The Indians save some local cavemen from a big meat-eater and ask about the painting, only to be told that the tribe that painted it migrated away months ago. Also, that particular tribe always kills strangers--though that's hardly a unique attitude in the Lost Valley.

They find a tribe that does indeed try to kill them. Turok and Andar avoid vine-swinging warriors and stumble across a stone alter with a buffalo horn mounted on top of it. They finally discover that yet another tribe, living a little farther on, is responsible for creating the alter and (presumably) the cave painting that started all this. 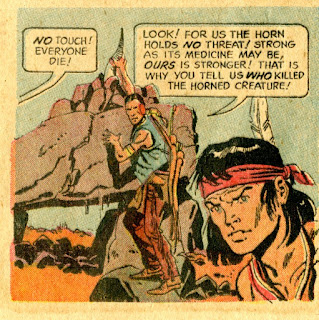 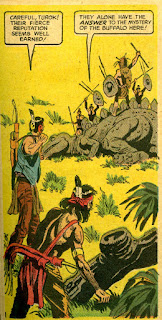 So the two friends march on to meet yet another tribe that immediately decides to kill them. I don't know what to think sometimes. Turok always had this mentor/teacher vibe to him that makes him one of the most likable characters in comic book history, but nearly everyone he meets in person wants to impale him with a spear.  Maybe its a body odor problem?


More shenanigans follow and Turok eventually gets the drop on the chief--who is wearing a buffalo robe and carrying another horn attached to the end of a spear. From him, they eventually get the story behind all this.

An earthquake had briefly opened a break in the cliff wall, through which the buffalo had entered the valley. The tribe credited this strange beast with bringing rain that ended a long drought. Later, the buffalo drove off a carnosaur, but was mortally wounded in the fight. 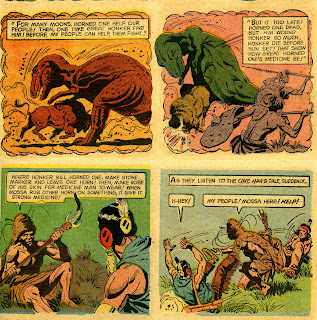 After this story is told, the cave men manage to capture Turok and Andar, forcing Turok to improvise a plan proving his "medicine" is stronger than the buffalo horn.

Created by the usual team of Paul S. Newman (writer) and Alberto Giolitti (artist), this story is yet another example of why Gold Key's original version of Turok still stands head and shoulders above all the ultra-violent reboots of the character.  Turok thinks his way through each situation they encounter as they try to track down the story of the buffalo. He fights when he has to and doesn't stint on the use of poisoned arrows against dinosaurs. But in the end, his natural intelligence and ability to think on his feet is his best weapon.

The plot unfolds logically (Newman was a master at plot construction) and Giolitti's art is typically strong. With Turok's strong characterization giving it all backbone, "The Phantom Mystery" is yet another example of why Turok Son of Stone is one of the best comic book series ever.

Next week, Roy Rogers and some really old guys shoot it out with a gang of thieves.
Posted by Tim DeForest at 9:00 AM