It’s her job to get kidnapped and, by golly, she does it well!


The main job of any Edgar Rice Burroughs heroine is to get kidnapped on a regular basis. That’s pretty much a given.
But I think Dian the Beautiful might have broken an ERB getting-kidnapped record in Pellicidar (1915), the second novel in the series about the titular underground world. 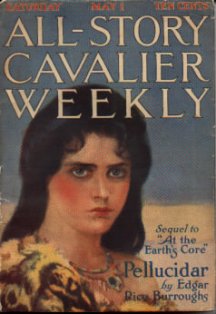 Seriously--poor David Innes can’t seem to keep his wife at his side for more than a few minutes before yet another cave man or telepathic pterodactyl snatches her away. Anytime he so much as stops looking directly at her, yet another villain has made off with her.
At the end of At The Earth’s Core, David had used the Iron Mole to return to the surface. As the next novel begins, he returns to Pellucidar, having stuffed the mole full of reference books, weapons and ammo. He strings a telegraph line behind him this time—which is how Burroughs eventually learns of his further adventures.
But when he gets back, he discovers that the nascent empire he had formed to fight the Mahars had collapsed. And, by the way, his wife has been kidnapped. 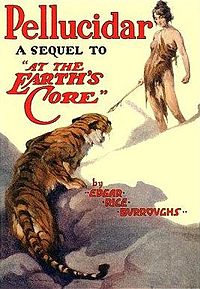 So David spends the novel in a cycle of rescuing and losing Dian while also working to reform the Empire of Pellucidar. The plot, therefore, meanders a bit from one action set-piece to another, but it’s a fun meandering and the action is exciting, so there’s nothing to complain about.
Besides, Burroughs casually drops some really cool elements into the story at random intervals. David, at one point, saves the life of a savage (and man-eating) hyaenodon and manages to tame it. I’ve always liked dogs myself, but if I were now to ever own a pet, I don’t think I would ever be satisfied with anything less than a hyaenodon.
Actually, Burroughs liked doing this—giving his protagonist a savage beast for an unlikely but loyal companion. Tarzan had Jad-bal-ja, the Golden Lion. John Carter had Woola, his ten-legged Martian “guard dog.” 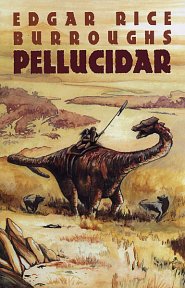 David also encounters several new tribes, including one that uses dinosaurs (specifically, diplodocus) as beasts of burden. While he’s having his adventures, Abner Perry teaches the natives ship-building, metal-working, sailing and gunsmithing. So, when David is finally able to hold on to his wife for more than a few minutes, he manages to re-establish his empire and lead a fleet of ships equipped with muzzle-loading cannon and rifles against the Mahar forces.
It all turns out to be a satisfying follow-up to the first book and brings the initial plot line to a satisfying conclusion. But Burroughs isn’t done with the world at the Earth’s core quite yet. He’s going to take a 14 year break from David Innes and Abner Perry, but in 1929 he’ll recount an adventure from the perspective of a native Pellucidarian. We won't wait 14 years before we take a look at that story. 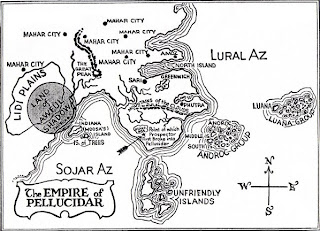