It’s the real Supergirl this time! I promise. 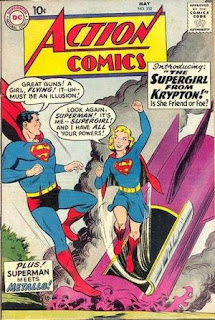 I know that Mort Weisinger would often supply basic story ideas or modify what the writers brought to him, but I have no idea how much of the Supergirl story in Action Comics #252 (May 1959) comes from him and how much came from writer Otto Binder. Both men had a keen grasp of comic book logic—the ability to think out the implications of the fantastic elements that populate Superman’s universe and use those implications for new story ideas and plot twists.

This time, an important factor of this story is that the explosion that destroyed Krypton turns all the surviving fragments (large and small) into deadly green kryptonite.

That’s important, because here we learn that a big chunk of Krypton broke away from the planet when it exploded, carrying and a large bubble of air with it. Don’t think about the science behind all this. That way lies madness.

’s leading scientist is Zor-el, brother of Superman’s dad Jor-el. He makes sure the city’s food machine is working—so they have food and air. They can survive, right?

Well, maybe not. Because the planet fragment they are sitting on turns into green kryptonite!

Zor-el deduces the problem and they cover the ground of the city with lead sheeting. Zor gets married, has a daughter named Kara and raises her into her mid-teens before a meteor storm punches holes in the lead shield. Suddenly, all is doomed to slow death by Kryptonite poisoning.

Apparently, no one in knows how to use a soldering iron.

Zor-el quickly throws together a space ship big enough to save his daughter. Using a space telescope, they locate Earth, decipher the language and learn about Superman. Kara’s mom makes her a version of the Superman costume and it’s off to Earth in the nick of time.

Of course, years later, it turns out Zor-el and his wife Alura zapped themselves into a Phantom Zone-like dimension in the nick of time. They eventually get out and settle in the bottle city of . 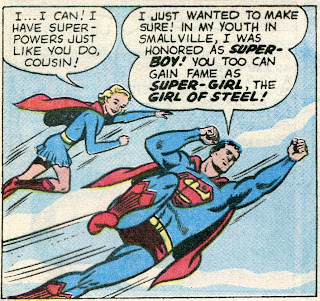 But for now, Supergirl thinks she’s an orphan. She arrives on Earth and meets Superman, who immediately sticks her in an orphanage, where she uses the name Linda Lee to preserve her secret identity.

She’ll soon get a family of her own, though, when she’s adopted by Fred and Edna Danvers. Superman will keep her existence secret from the world for a few years, before revealing her to an enthralled public in Action Comics #285 (February 1962). 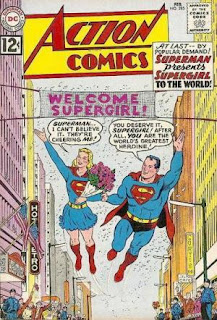 Supergirl is a fun idea for a character and a vibrant edition to Superman’s rapidly growing cast of characters. She’ll have adventures of her own, team-up adventures with Superman, be instrumental in adding several Superpets to the line-up and travel to the future to join the Legion of Superheroes (where she’ll often work with Superboy—the explanation for why Superman didn’t know her when he meets her for the “first time” as an adult will be yet another example of priceless comic book logic.)

But Supergirl isn’t the only survivor of Krypton that enters into Superman’s life during the Weisinger era. Next time we visit Metropolis, we’ll meet another lesser-known survivor from Krypton.