History of the Marvel Universe: July 1970 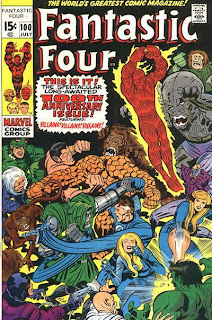 Stan and Jack celebrate 100 issues of the Fantastic Four by giving us a wonderfully entertaining fight scene. 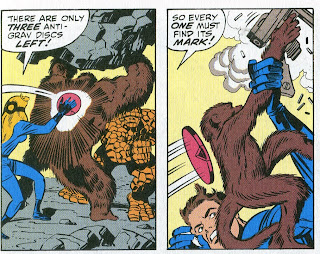 Which pretty much summarizes the entire issue. The story here is pretty basic—the FF (including Crystal in a small continuity error—since she said last issue she’d have to stay at the Great Refuge for awhile) are flying home after visiting the Inhumans. Their ship is shot down over a remote island, where they are attacked by nearly everybody they’ve ever fought. Doctor Doom—the Frightful Four—Diablo—Dragon Man—the Submariner—Red Ghost and his Super Apes—and so on—all jump them either singly or in groups.

Reed soon figures out that their opponents are androids. They are actually the work of the Mad Thinker and the Puppet Master, who are working together to make perfect android duplicates of the FF’s Rogue’s Gallery.

This story really allows Jack to go to town. I recently ran across a comment that by this time, Jack Kirby was marking time at Marvel and saving a lot of his really great ideas for when he went to DC. There may be some truth in this, but both FF and Thor included great stories and strong art right up until Kirby’s departure. And, heck, the Skrulls-pretending-to-be-mobsters story arc from a few issues ago was seriously awesome.

I think he was too much of a pro to do anything other than top-notch work. Also, even second-tier ideas from a man who was pretty much made of imagination are probably going to be better ideas than most of us will ever have.

Even here, where we have an issue where the story is just an excuse to give us a huge fight scene--Jack Kirby still makes sure it’s a great fight scene.

In the end, Thinker and Puppet Master try to make a Hulk and do too good a job. The ersatz Hulk trashes their lab and the FF escape from the island. It’s all a fitting tribute to nearly a decade of epic storytelling.

There’s one other mistake that doesn’t effect the quality of the story, but it’s kind of fun to point out. Reed sees the Androids they are fighting are mechanical contrivances and deduces the Puppet Master is involved. Neither he nor the rest of the team ever realize the Thinker is also involved.

But the Puppet Master doesn’t make androids—that’s the Thinker’s shtick. The Puppet Master makes clay puppets that allow him to mind control people. Reed seems to have been a bit confused there.

In fact, I don’t think story was completely clear on how the Thinker and P.M. were combining their abilities. Was the Thinker building androids and using the Puppet Master’s clay to form the bodies? There’s no mind control involved in the plot, so exactly what was the Puppet Master contributing to the whole plan? I think Lee and Kirby actually might have gotten a bit mixed up as to what villain did what when they were plotting out this particular tale.

But I’m actually taking up far more space nitpicking than this issue deserves. The fight is too grand a spectacle to allow such details to spoil the fun. 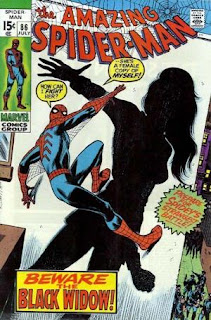 We are re-introduced to the Black Widow in this issue.

Natasha’s been around for awhile now—appearing way back in Tales of Suspense #52, spying on Tony Stark for the Soviets. At first, she was a swanky femme fatale, but this is a comic book universe, so she gradually morphed into an Action Girl.

By now, she’s long since defected to the and become a good guy. This issue of Spider Man was used to introduce her modernized look—for the first time, she puts on the skin tight black suit that amped up her “Hubba Hubba” factor by several levels of magnitudes.

She’s looking for a way to be useful and decides to go after Spider Man. The story is actually a little bit weak here—her motivation is to learn the “secret” of Spidey’s power and add it to her own. It almost makes her come across as a villain, which is clearly not the intent here. Besides, how the heck does beating the snot out of Spider Man help you learn any secrets he might have? It might have been better if (as was the case with Quicksilver a few issues back) she just decided to bring Spidey in because she thought he was a crook. 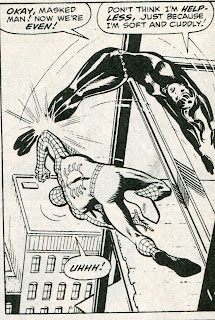 The two have a fight, in which Spidey notices he’s not as fast and strong as he usually is. But the fight is a draw and the Widow realizes that her plan was dumb as she swings off.

This is all perfectly good stuff. There’s nothing wrong with guest starring a character in a popular book to generate interest in that character—as long as the story is a good one and it doesn't force you to buy another series to finish up that story. And it would have been perfectly acceptable if Stan Lee and John Romita took time out from regular continuity to do a single issue Black Widow story.

But Stan and John manage to weave the Black Widow fight into the book’s continuity and even use it to help advance the story line. Peter’s concerns that his powers are waning is something that will culminate in a major plot twist next issue.

And there’s still a few scenes involving Gwen. She sees Peter with bruises on his face (left over from his tussle with Kingpin last issue) and assumes that Spider Man is responsible. This increases the tension that already exists from Peter’s efforts to keep his superhero identity a secret. And this will also tie into the sub-plot involving Peter’s reduction in his powers. It all adds up to thoughtful and well-constructed storytelling.

That’s it for July. In August 1971, the FF gets muscled by the Mob and Spider Man reveals his secret identity to… well, everybody.
Posted by Tim DeForest at 9:00 AM