There are, of course, two kinds of people in the world. There are the intelligent and kind-hearted saints who have read my books. Then there are the uncultured and thuggish Philistines who have NOT read my books and who probably beat up puppy dogs just for the fun of it.

Since I’m sure no uncultured Philistines visit my blog, then I’m presuming you have all read my books. If you haven’t, then you should immediately institutionalize yourself before you do any more harm to society.

I’m making this point because we are going to be taking a look at the six Moto novels written by John Marquand between 1935 and 1957. Since I talked about these novels in Radio by the Book: Adaptations of Literature and Fiction on the Airwaves, I will be repeating myself here. So doubtless I am telling you things you already know. Because you have read my books, haven’t you? 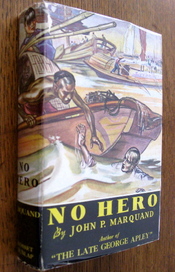 Mr. I.A Moto is a soft-spoken and very polite Japanese man who works for the Japanese Imperial government in the years before World War II. He’s a man of many talents. For instance, he worked as a valet while attending an American university. He can tend bar, perform carpentry, sail a boat and—if it is necessary to do so in service to his Emperor—slit your throat from ear to ear. Of course, he would apologize profusely for the necessity of doing so.

John Marquand was asked to create an Oriental detective character by the editors of the Saturday Evening Post, who wanted to fill a gap left by the death of Earl Derr Biggers (the creator of Charlie Chan). Marquand toured the Orient on the Post’s dime and created not a detective, but a spy. Possibly the coolest spy ever, because we can’t help but like and admire Mr. Moto even when he’s not really one of the good guys.

And that’s one of the most interesting things about the Moto novels. Mr. Moto isn’t the main character—there’s a different protagonist each time out. Often, the protagonist is a cynical American adrift in the Orient who gets caught up in some conspiracy or other espionage shenanigans. Mr. Moto will also become involved but--depending on the circumstances—he might be an ally or he might be an enemy.

The first Moto novel—NoHero—was serialized in the Post in 1935, with an alcoholic American named Casey Lee taking on the lead role. (The novel has occasionally been given the title Your Turn, Mr. Moto in some book versions.) 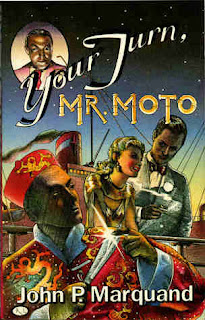 Lee is a former Navy pilot who flew in combat during the Great War and later made a name for himself as a daredevil civilian pilot. But now he’s past his prime and drinking too much. He’s in to make a Trans-Pacific flight, but when his sponsors pull out, he publically bashes the , ripping up his passport and declaring that “There are plenty of other countries.”

This brings him to the attention of Mr. Moto, who soon recruits Lee, asking the disillusioned pilot to pump his old Navy buddies for military information. Lee agrees at first, finding ways to rationalize the decision to himself. That Moto is using a pretty Russian refugee named Sonya to help recruit Lee is another factor in the pilot’s decision.

But, much to Lee’s astonishment, he soon realizes he can’t bring himself to betray his country. “Men die for their faith who have never been inside a church,” he explains, “and men die for their country although they may have spent their lives criticizing all its works. The amazing thing is that they are probably surprised by their irrational willingness to die.”

So Lee begins working against Moto. It soon turns out that Sonya is really on his side. Well, maybe. Or maybe she has an agenda of her own.

Soon, intrigue, escapes and assassination attempts begin to run deep. Everything turns out to revolve around a message that gives the location of a certain very valuable object that might change the balance of power in the Pacific. A powerful Chinese crime-lord is also involved by now and may have a jump on everyone in recovering that object. But Lee’s ability to fly an airplane might just upset everyone’s plans.

The Moto novels get off to a great start with No Hero. Marquand (who would eventually win the Pulitzer Prize—though not for any of the Moto novels) was a superb writer who employed clear and clever prose while presenting both Americans and Asians as complex and very real people. This is especially notable in the character of Mr. Moto. Though he’s technically the antagonist this time out, we can’t help but admire him. He might be ruthless when he feels he has to be, but we understand that he does what he does in service to his country. We really can’t help but like him. Besides, he’s so darn polite to everyone—how can anyone dislike him? There are five more books to come and Moto’s presence ensures all of them will be worth visiting.

Mr. Moto has had a pretty varied career in the various media in which he has appeared. He was a detective/spy working for Western political interests in the excellent Peter Lorre film series from the 1930s, then became an American-born CIA agent in the 1950 radio series. Gee whiz, one of the books should have been titled Make Up Your Darn Mind, Mr. Moto.

But then, you all already knew all that. You have read my books, haven’t you?

Email ThisBlogThis!Share to TwitterShare to FacebookShare to Pinterest
Labels: In Order, Mr. Moto