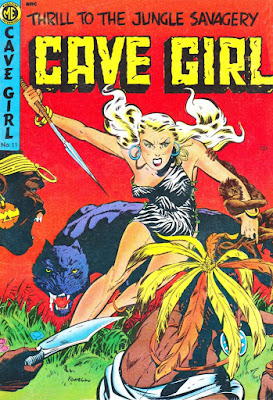 Everyone falls in love with Cave Girl. It apparently can't be helped.
Over the course of the first three stories included in Cave Girl #11 (her debut issue despite the numbering), two men have fallen in love with the blonde Jungle Girl already. In fact, in this issue's final story (still written by Gardner Fox and drawn by Bob Powell), Luke and Alan haven't given up yet. They are attempting to cross the mountains that surround Cave Girl's home jungle, still determined to talk her into coming back to civilization and claiming her inheritence.
Both of them, though, have collapsed from the cold before we get past the first page of the story.
Cave Girl, in the meantime, has climbed these mountains as well as she helps a monkey mommy find her lost baby. But, predictably, she finds trouble instead. She is attacked by half-man, half-animal snowmen, who outnumber Cave Girl sufficiently to take her prisoner.

The snowmen find Luke and Alan unconscious in the snow and bring them along as well. In the most ill-timed conversation in the history of mankind, they explain that they want to take her back to the outside world while they are all being led to die horrible deaths at the hands of brutal animal-men.

The leader of the snowmen is Gaa, who [drum roll, please] falls in love with Cave Girl. He orders Luke and Alan to fight to the death for her, with Luke winning and apparently killing Alan after a prolonged duel with spears. Gaa, though, rewards Luke by having him hung over a cliff to feed the buzzards. 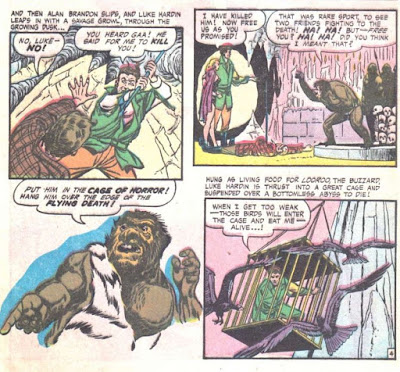 As I've mentioned in earlier Cave Girl reviews, it doesn't take a literary genius to realize that Fox and Powell are having some fun with the genre, mixing in parody with the adventure. But Powell's engaging art and Fox's scripts work on both levels, as parody and adventure.
Cave Girl--never a helpless Damsel in Distress--breaks free from Gaa , starts a fire to keep him away from her and makes a dangerous climb up a smoke-filled chimney. She rescues Luke with the help of Alan, who had faked his death earlier. 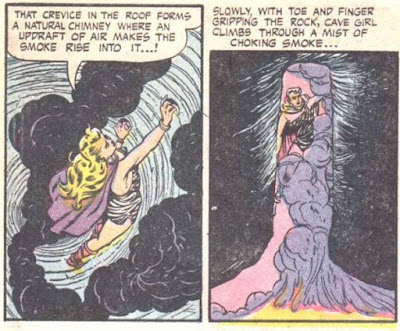 So Luke and Alan do okay in this story with their improvised plan to fake their death duel. But Cave Girl is still very much the Hero-in-Charge, improvising a tactic of her own that sends Gaa and a bunch of his fellow snowmen off a cliff. 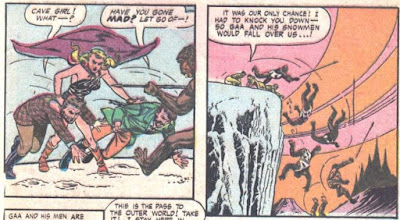 Still adament about staying in the jungle, she sends Alan and Luke home. Luke, at least, will pop back up as an occassional guest star in future stories, but Cave Girl has made her decision. She will always prefer the jungle over noisy, confusing civilization.
You can read this issue online HERE.
That completes our look at the first issue of Cave Girl. We'll leave her be for the time being. If I keep reviewing her stories, then it is apparent that I will inevitably fall in love with her. I'm pretty sure my wife would get mad at me if that happens.
Next week, we'll return to Ben Grimm and Project Pegasus.
Posted by Tim DeForest at 9:00 AM