How many Robin Hoods does it take to make one Little John?

Alan Hale, Sr. looks a lot like his son, Alan Hale, Jr. In fact, when, as a little tyke,  I first saw Errol Flynn movies on TV, I remember thinking that Hale the Elder (who sidekicked for Flynn in many of those films) was the same actor who put up with Gilligan’s shenanigans ever week on that darn island. I thought that was pretty cool. The Captain of the Minnow had been quite an action hero in his youth.
That pleasant illusion was eventually shattered—these were indeed two different guys. But, gosh darn it if the Skipper wasn’t a near mirror image for his dad. 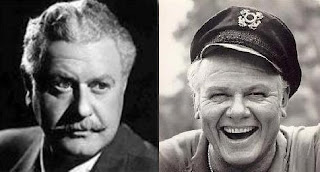 Hale the Elder had a long career in as a character actor.  He started back in the silent days, with one of his more memorable supporting roles coming in 1925. In that year, he was cast as Little John in the Douglas Fairbanks version of Robin Hood

.
This is not the absolute best of the swashbucklers, but it comes close. And there’s really no such thing as a bad swashbuckler. ’ stunts are, of course, awesome and in this instance are used to generate as much humor as adventure. But what makes this version of the Robin Hood legend really interesting is the way the story is constructed. It starts out with Sir Robin still a knight, falling in love with Maid Marion just before he rides off with King Richard to fight in the Crusades. Little John is his retainer. 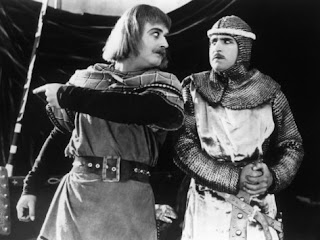 Along the way to the , he gets word that evil Prince John is usurping power. After being wounded by an enemy and escaping imprisonment, he returns to England and makes John’s life miserable as Robin Hood until Richard returns and justice is served. It actually takes about half the movie before he becomes “Robin Hood.”
Not that this is a criticism. Good storytelling and character development, along with ’ screen charisma and some magnificent visuals, keep things moving along until we get to the Robin Hood part.
Hale’s Little John, by the way, gets a Crowning Moment of Awesome when he busts Robin out of prison about halfway through the film. Make a note to yourself in case you ever find yourself working as a dungeon guard in a medieval castle. Don’t get close enough to the bars to allow the big, strong prisoner to reach through and grab you by the throat. And if THAT does happen, just give him the keys without objection. Trust me on this.
Well, let’s now jump ahead 14 years. Errol Flynn had proven in 1935 that he was born to play Peter Blood. In 1939, he proved that he was also born to play Robin Hood.
And when he played Robin, he was assigned an experienced Little John. Alan Hale, Sr. plays that role once again.
In this perfect, fairy tale-like version of the story, Robin of Locksley is already “Robin Hood” pretty much from the get-go. After doing some cool swashbuckling and getting on Prince John’s nerves, he finds himself hiding in . There, he encounters Little John. The two have a quarterstaff fight and Robin comes out on the losing end. In one of the best character defining moments ever put on film, Robin joins Little John in laughing off the whole incident and the big guy becomes one of the Merry Men. Thus, Hale the Elder gets himself yet another Crowning Moment of Awesome in a Robin Hood movie.

Well, you’d think that would be enough Little Johning to last a life time. But it’s not. In 1950, Hale the Elder popped up in a B-movie titled The Rogues of Sherwood,  in which Robin Hood’s son re-forms the Merry Men to battle against the tyranny of King John.  Hale was getting a bit long in the tooth to be swashbuckling by this time, but the time frame of the movie would seem to allow for that. 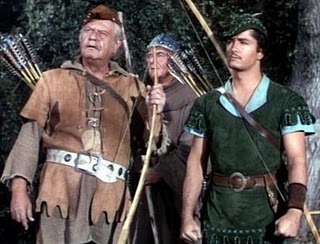 I haven’t seen The Rogues of Sherwood yet. Netflix, darn them, doesn’t carry it despite the fact that there is a DVD available. And, as much as I love B-movies, this one just doesn’t have a “Buy Me!” vibe to it. If I ever find a cheap copy, I’ll pick it up and give it a try.
I want to see if Hale/Little John was able to get in one last Crowning Moment of Awesome.
Posted by Tim DeForest at 9:00 AM