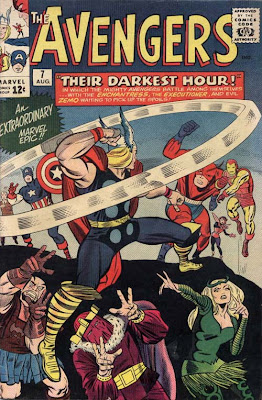 
The Marvel Universe as a whole continues to intertwine. Here, we have two references to events in other books. First, Iron Man is suspended from the Avengers for a week for failing to answer an emergency call; this is a follow-up of the events from this month's Tales of Suspense.

Then the story shifts to Asgard, where the Executioner and the Enchantress are both being exiled to Earth by Odin for attacking Thor in Journey into Mystery #103.

So the Avengers are understrength when the Asgardian bad guys team up with Baron Zemo to exact their mutual revenge. And this all dovetails nicely with a scene in which Captain America gets angry with Rick Jones when the teen tries on Bucky's old costume. The incident convinces Cap he can never take responsibility for another partner and leaves him particularly eager to track down Zemo.

The villains lure Cap to Zemo's South American refuge, but underestimate how skilled a fighter he is. Meanwhile, Enchantress hypnotizes Thor and convinces him the other Avengers are evil. So we get a fight scene taking place on two fronts simultaneously--with the action shifting back and forth between New York City to the Amazonian jungle. Jack Kirby seems to have particular fun with Cap, laying out an energetic, fast-paced slugfest as Cap single-handedly holds his own against Zemo's minions. 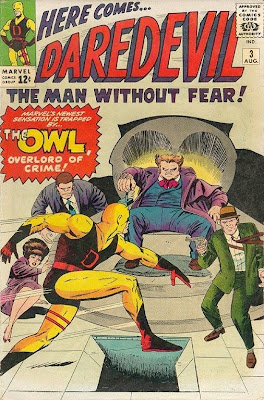 
Daredevil finally gets around to adding someone to his own Rogue's Gallery. The Owl is a ruthless crime boss who had always worked behind the scenes. His name comes from both his appearance and his ability to use his specially designed cape to glide on air currents.


When the cops finally get some evidence against him, the Owl goes into hiding and continues plotting evil from there. Matt Murdock encounters him first as a lawyer--the Owl hires him as a defense attorney before he decides to simply take it on the lam.


So it's not long before Matt goes up against the crime boss as Daredevil. He and his secretary Karen Page are captured, but Daredevil makes good use of his powers to plan an escape. The Owl escapes in the end, but his minions are all captured.


It's a good issue in several ways. The Owl is a ruthless and effective opponent and Joe Orlando's art work is really nice. There are a few flaws. Quite a few panels are used introducing us to the Owl's two main henchmen (one a sharpshooter, the other a wrestler), but neither really plays all that big a role in the ensuing action.


Also, Matt and Karen are still secretly mooning over each other, with neither feeling they can tell the other their true feelings. This mirrors exactly the Thor/Jane and the Tony Stark/Pepper situtations. There's even an undercurrent of it with Reed and Sue. It's a characterization device that Stan Lee simply overused in those early years.


That's it for August. In September, the FF makes a minor addition to their Rogue's Gallery; Spider Man teams up with Daredevil; Johnny and Ben go up against an old enemy; Dr. Strange helps a damsel in distress, then gives Thor a hand; Iron Man clashes with a couple of opponents destined to one day be his friends; the Avengers take on a menace from the future; the X-Men have a re-match against the Blob; and the Hulk clashes with Giant Man as the big green guy once again gets a regular series within the pages of Tales to Astonish.
Posted by Tim DeForest at 9:00 AM