Okay, maybe THIS is the best battle scene ever. 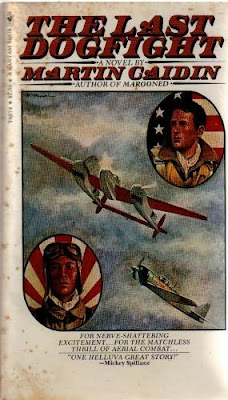 Last month, I posted some comments on the novel Beat to Quarters, in which I stated that one of the reasons I like the book so much is its vivid and seat-of-your-chair exciting battle scenes. The post was titled "Best Battle Scene Ever."

And it very well may be the best ever. But I've been thinking about that (because--well--it's the sort of thing I tend to think about) and a case for several other literary battle scenes being the best can be made.

There is, for instance, The Last Dogfight

(1974), by Martin Caidin. Set during World War II, it takes place in an out-of-the-way island chain in the Pacific. A Japanese air squadron occupies an island at one end of the chain. An American air squadron, flying outdated P-40 Warhawk fighters, is located at the other end of the chain. The two enemy forces pick away at each other every chance they get.

The book is written by Martin Caidin. He's perhaps best known for his science fiction novels, most notalby Cyborg, which was the basis for the TV series The Six Million Dollar Man. (Cyborg, by the way, is much different and much better than the TV show.) But Caidin was also an accomplished military historian and a pilot, so he knew what he was doing when writing about aerial combat. Consequently, he was able to fill The Last Dogfight with one extraordinary and realistic battle scene after another.
-
-

The Japanese Zeros can out-perform the P-40s and one particular pilot, Shiguro Tanimoto, has over a dozen kills. But one American pilot, Mitch Ross, is doing just as well, his own skill more than making up for his inferior aircraft. Later, the Americans get more advanced P-38 Lightnings, giving them the advantage. Tanimoto, though, still seems invincible.
-
-

Late in the novel, after the bomb drops on Hiroshima, Tanimoto and Ross arrange a one-on-one duel to find out who really is the best.
-
-

And the battle scenes really are great--both the large-scale affairs and the one-on-one dogfights. Caidin takes us into a sky full of airplanes all trying to shoot each other down, expertly describing the potentially confusing action in clear, fast-moving prose. He wraps this all in some great characterizations, both with the main characters and the supporting cast. Caidin wasn't just an expert in combat planes and military history--he was also a superb storyteller.

Then again, there's The Beardless Warriors

(1960), by Richard Matheson. Matheson is also best known for his science fiction and horror novels. He turned out some of the best scripts for the original Twilight Zone, had a transporter accident split Captain Kirk into good and evil counterparts on the original Star Trek and gave us the creepy and heartwrenching last-man-on-Earth novel I am Legend.
-
-

But The Beardless Warriors is an intensely realistic portrayal of infantry combat during World War II. Based on Matheson's own wartime experience, it takes us to Europe in December of 1944, as an American division moves forward to capture a German city.
-
-

The main character is Hackermeyer, an 18-year-old from a broken home who turns out to be one heck of a soldier. Along the way, he also comes to look upon his squad leader, Sgt. Cooley, as a father figure, slowly learning what it's like to care about other human beings. It sounds a bit corny when baldly stated, but Matheson does such a superb job of character development that it literally couldn't seem more real. It actually takes an effort to remember that Hackermeyer, Cooley and the other members of the squad are just fictional constructs.

But we're here to talk about battle scenes. Matheson puts us on the ground with the common grunts and makes us hear the bullets whiz through the air over us and feel the impact of the mortar shells exploding nearby.
-
-

The first advance on the city is stopped by a German counterattack and all Hackermeyer really gets to do is run for his life. The second try gets farther and Hackermeyer gets his first few kills when he guns down some Germans charging towards him, then finds himself alone in the woods dueling with a sniper. When the attack is driven back within sight of their objective, Hackermeyer is cut off behind enemy lines and must find his own way home.
-
-

The final assault reaches the city and a violent street-to-street battle ensues. The squad ends up trapped in a torn-up building, with a couple of enemy tanks rumbling towards them....
-
-

The Beardless Warriors is one of those books that refuses to be put down until you've reached the end.
-
-

It's really too bad it's not somehow possible to let the three books fight it out among themselves.