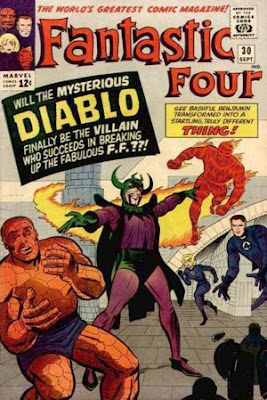 
This issue introduces Diablo, the evil alchemist. He's definitely not one of the top-tier Marvel villains, either visually or in terms of personality, but he's an okay addition to Marvel's growing stable of second-string bad guys.


In his debut, he uses his alchemist skills to pretend to save humanity--growing crops in the desert, protecting cities from A-bombs with impenatrable shields, selling immortality serums. But it's all only temporary, with the effects wearing off after a short time.


He also gets Ben to work for him for a time by promising to turn him human again, changing him to a half-Thing, half-human state and withholding the rest of the "cure" until Ben's provided a year's service. This, of course, is another con.


One weakness of the story is that Diablo's plan doesn't really make sense. His cons allow him to rake in some money and fortify his Transylvanian castle, but he gets the whole world ticked off at him. I'm not entirely sure what he was planning on doing next. Count his money while he waits for a flight of B-52s to bomb his castle into rubble? This plot hole is the main reason this issue is a little weak.

Well, it's not a flight of bombers that attack his castle anyways. It's three-quarters of the Fantastic Four, determined to take him down and rescue Ben. What follows is another well-choreographed Kirby fight scene. Sue gets to shine in this one, using a really cool tactic at one point. She turns Diablo invisible--nearly getting him trambled to death by his own guards. 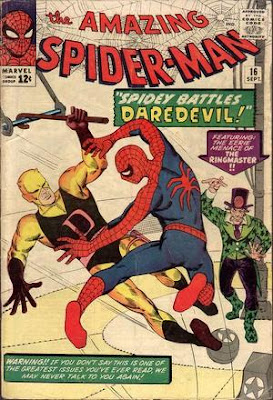 
This issue exists mostly to plug Daredevil, still a relatively new addition to the Marvel Universe. But that's just fine, since it's a good story and it's self-contained within Spidey's own book.


The Ringmaster and his Circus of Crime have what is actually a pretty good plan--Ringmaster will hypnotise the whole audience in the big top after the show has started. After everyone has their wallets and valuables taken, they'll be brought out of their collective trance. When anyone notices he's been robbed, he'll assume it must have been the work of a pickpocket.


But Matt Murdock is in the audience and his blindness protects him from the hypnotism. He has to go up against a hypnotized Spidey for a brief time until he manages to snatch the Ringmaster's hat and use the mind-control device built into it to snap Spidey out of it. Then the two heroes double-team the evil circus performers. The best sequence comes when a human cannonball is shot at Spider Man. The webslinger jumps on the guy's back as he whizzes by and uses a strand of web like a horse's reins to guide the poor guy around to smash into his own allies. 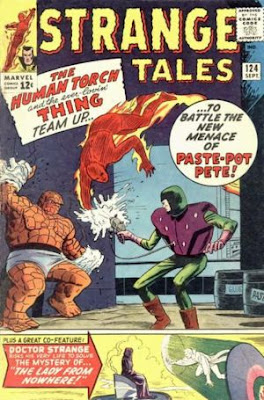 
There's a nice bit on continuity at the beginning of the Human Torch story. Johnny learns that Paste Pot Pete has been parolled after helping the Avengers a few months back. (He helped come up with a solvent for Baron Zemo's Adhesive X.)


Now, Pete (with a better costume--though his name change to the Trapster hasn't happened yet) is looking for revenge. He manages to capture Ben and Johnny, but the two work together to bust free and nap the bad guy.


Meanwhile, Dr. Strange stumbles across a woman kept confused and helpless by a magic spell. The Sorceror Supreme tracks the source of magic back in time a couple of thousand years and strips an evil magic-user of his powers, freeing the woman from the spell. The woman's identity? Cleopatra. This is actually the second time a superhero from the future has helped out the Egyptian queen--Iron Man did a bit of time travelling way back in Tales of Suspense #44 to help Cleo against the invading Romans. It must be nice to be the queen.


That's it for now. Next week, we'll peek in on Thor, Iron Man, Giant Man and the Hulk.
Posted by Tim DeForest at 9:00 AM