Edgar Rice Burroughs wrote with the intention of serializing it, but none of the magazine editors who normally snatched up his stuff were interested. It was eventually printed as a book in 1944. 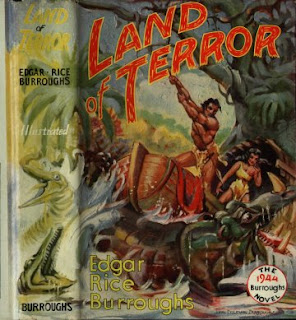 Burroughs’ longest series was, of course, the perpetually popular Tarzan. I’m pretty sure Burroughs could have written a novel in which the Lord of the Jungle spends the entire plot trying to teach a tribe of apes how to play Yahtzee and he STILL would have found a buyer for it. 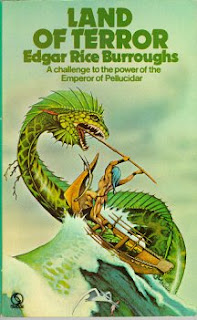 But couldn’t find a home in the pulps. I can understand why. Though the novel as a whole is still entertaining, a few of the individual sections were poorly developed and there are several annoying anti-climaxes at the end.

The book picks up where Back to the Stone Age left off. David Innes (returning to center stage as protagonist and narrator for the first time since Pellucidar) is returning home with the expedition that located the badly lost von Horst (hero of the previous novel).  The party is attacked by a tribe of bearded women and David is captured. His allies think he’s been killed, leaving him pretty much on his own. 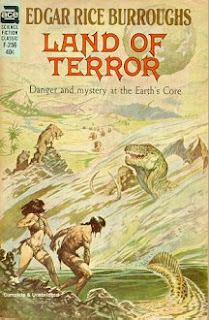 He soon escapes from the tribe of bearded Amazons, then gets captured by a tribe consisting entirely of insane people, all of them suffering dysfunctions that range from delusions of grandeur to severe hypochondria to random maniacal behavior.

Here he finds his wife, Dian the Beautiful, who had also been captured after a series of separate adventures. They escape, but get separated again. While searching for her, David gets successively captured by a tribe of ten-foot tall giants, a colony of giant ants; and a tribe that lives on a floating island. He escapes each time, though, and eventually gets home and reunites with Dian. All this is perfectly fine in terms of the basic plot, but—as I mentioned earlier—several of the mini-adventures are perfunctory and read as if Burroughs needed to do one more re-write before he was done. Notably, the bearded woman tribe and the giant cannibal tribe are just there to be weird—Burroughs does nothing (other than milk a few reverse gender role jokes) with these potentially interesting civilizations other than let them hold David prisoner for a short time before he escapes.  Burroughs had a talent for building bizarre civilizations that have their own internal logic, but here he stops short of doing the job properly.

There’s a few other signs of laziness--as if Burroughs just wanted to get another Pellucidar novel out of the way so he could move on to something else.  David learns that Dian is being pursued by an unwanted suitor, something that’s supposed to build up suspense as it means David now need to find her as soon as possible. But this backfires when, at the novel’s climax, we learn that Dian resolved this situation off-screen. Heck, we don’t even get to meet the bad guy. 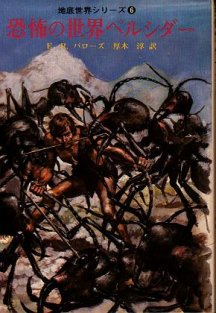 But the novel as a whole still manages to be fun. Burroughs generates some bizarrely dark humor out of David’s adventures in the village of crazy people, while the sequence in which he’s held prisoner by giant ants (and force-fed with regurgitated food by the ants) is genuinely creepy.

Oh, well, I know I shouldn’t complain. Burroughs himself explained that he wasn’t a fiction writer, but a biographer, getting his information from people like Jason Gridley, John Carter and the guy who knew the guy who knew Tarzan. So if David Innes has an adventure which isn’t quite as interesting as his previous ones, we really can’t shoot the messenger because of this, can we?

One of Pellucidar book to go and then we’ll move on to something else for the literature section of our Read/Watch ‘em in Order series.
Posted by Tim DeForest at 9:00 AM