I see your secret elephant graveyard and raise you a secret DINOSAUR graveyard.

The idea of a secret elephant graveyard—a spot where elephants all go to die when they get old—is an old legend that’s been used a number of times in adventure fiction.

But in Turok, Son of Stone #65 (April 1969), the idea is taken one really, really cool step farther when Turok and Andar become involved in finding a secret dinosaur graveyard. 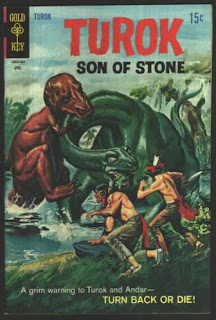 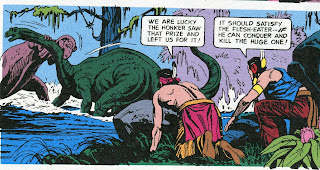 The two Indians are carrying out their never-ending search to find a way out of the when they witness an epic battle between a T-Rex and a brontosaurus. The big sauropod drives off the flesh-eater, but it’s wounded and bleeding—obviously doomed.

When the brontosaurus wanders off, Turok begins to think about how they never see all that many skeletons of dead “honkers.” Do they all wander off to the same place to die? If so, is that burial ground perhaps outside the valley? 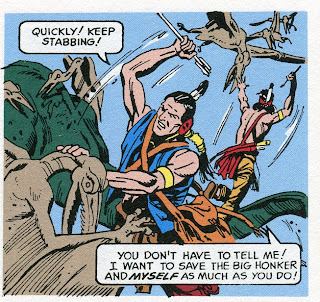 So Turok and Andar begin tailing the brontosaurus, encountering various dangers along the way and even helping the dinosaur out when it’s attacked by a flock of pterodactyls. But when a tribe of cavemen block the pass that presumably leads to the burial ground, the brontosaurus gets away from them.

Turok comes up with a bold plan to get through the pass—a plan that involves ticking off a hungry allosaurus. This gains them entry into what does indeed prove to be the dinosaur graveyard (though not exactly a graveyard). But when Turok is badly injured, it’s up to Andar to single-handedly fight an angry flesh-eater and deduce exactly how to save his friend’s life.

The best Turok stories from the Gold Key era involve Turok thinking his way out of dangerous situations—using his brains as well as his skill with a bow to stay alive. This particularly strong story has all that, but climaxes with the much younger Andar on his own, being forced to exhibit the traits of courage and cleverness that his mentor has always demonstrated. 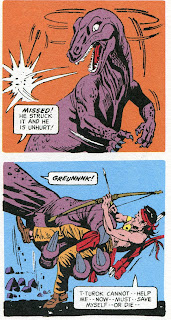 Adding to this are the imaginative visuals. We start with the fight between two large dinosaurs and end with a human vs. allosaurus duel amongst the huge skeletons of the dinosaur burial ground. In previous posts, I have often been a little critical of the interior art in Turok.  But as I revisit these stories through the Archives series now being published, I find myself more and more appreciative of the sheer level of imagination that was shown between the covers of those wonderful comic books.

Revamps of Turok over the years have emphasized violence and often been far too gory while turning Turok into a stoic killing machine, but the original series had almost an innocence to it that worked to make its stories much more memorable and entertaining than later efforts have been. Turok, Son of Stone was filled with great ideas for its individual stories, but the series as a whole was essentially was about a father figure being an effective role model to his “son.”