History of the Marvel Universe: March 1970 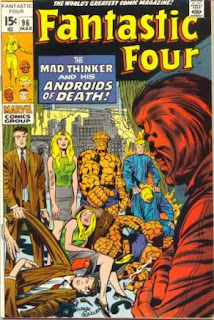 The Mad Thinker is up to his old shenanigans once again. He’s ambushing the FF one by one and replacing them with androids. 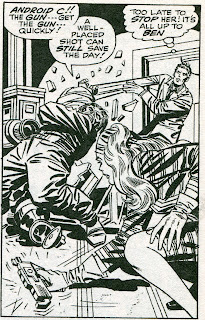 But Reed Richards manages to get the best of his android and poses as that artificial duplicate until he gets a chance to attack the other androids. He links up with Ben and the two put the kibosh on the FF androids and the Thinker, rescuing Johnny and Sue in the process.

This issue is a fine example of what a single-issue story should be—pure fun with great visuals. Watching Reed and Ben battle “themselves” is a real pleasure.

Also, for no real reason at all, I like the fact that the FF and their android doubles are in civilian clothes rather than their uniforms during the battle.

There’s not a lot else to say here. The story isn’t particularly deep or complicated, but it doesn’t have to be. It’s just plain, simple fun. 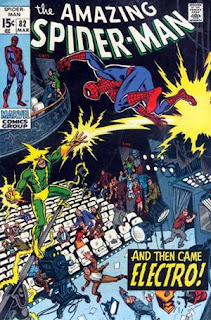 And here we have another example of a great single-issue story, though this one plays off of Peter’s continuing character arc quite effectively.

Pete’s feeling down in the dumps about his various problems, most especially that he had to convince Aunt May she was seeing things when she saw the web dummy in his bed last issue. He’s also worried about his lack of money and his inability to properly wine and dine Gwen.

So, on a whim, he swings into the office a network executive and offers to appear on a talk show that night. There is, I suppose, a continuity error here. Peter already knows he can’t get paid without giving his real name, social security number and so on. That’s what happened when he tried show biz back in Spider Man #1.  In fact, the problem is acknowledged in this issue, but is glossed over with a joke and not mentioned again.

But this is a strong enough issue to make us forgiving.

Max Dillon, aka Electro, is working as an electrician at the studio while he’s on parole. He cuts a deal with Jameson to unmask Spider Man on the air. This leads to a fight that pretty much ends in a draw, but ruins Peter’s chances to make some extra cash. 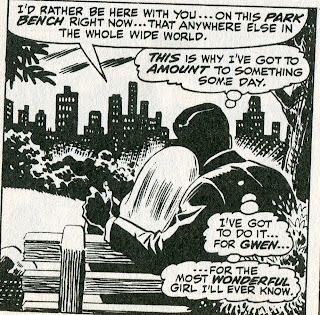 The fight scene is a typically good one in terms of visuals, but it’s the character moments that make this issue notable. Peter’s problems all make sense in context to his life as a super hero, but still keep him grounded as a human being we can relate to. His scenes with Gwen, in which she tells him she doesn’t care that he’s broke, are legitimately sweet.

There's also a panel that might just be the single funniest gag ever to appear in Spider Man. Peter needs to wash his Spidey suit before his TV appearance. So as to not giveaway his secret ID, he wears a bag over his head while at the laundry-mat.

I also like Electro’s characterization. He’s presented as angry with the world and thinks the worse of everyone as he just waits for an opportunity to jump back into action as Electro. But Stan Lee does some subtle characterization here. Though it’s not emphasized, we do see that Dillon has gotten a good job and seems to have the respect of his peers. His parole officer seems to be supportive of him. But he’s blind to all this—thinking of them all as “smug jerks.”  It’s a nicely done and effective characterization of a man who’s perceptions of those around him are skewed by bitterness. 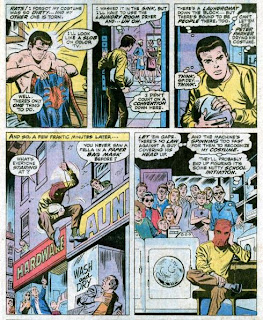 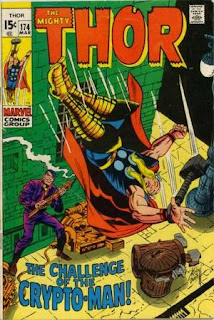 After I spent so much time in the last Marvel entry whining about what I thought were mediocre issues, I’m glad I can give three thumbs-up in a row this time around.

The Thor story is another single-issue affair in which a young scientist has his theories mocked by the established scientific community and decides to take a trip to Crazy Town. To prove his theories, he knocks Thor out with a hypno-beam, then uses another device to draw out half of the Thunder God’s strength. He transfers this strength into a robot called the Crypto-Man and sends it on a rampage. 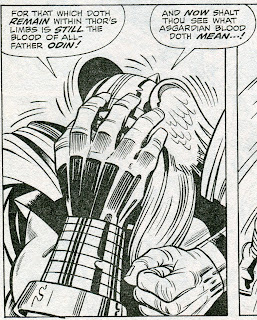 Thor fights the robot, but with half his strength given to his opponent, he’s not able to defeat it. But when the robot breaks into a nuclear reactor and becomes a threat to the entire city—including the scientist’s elderly mother—the scientist has a change of heart. He deactivates the robot, sacrificing his life to do so.

Yes, it’s corny and even at the time not that original. But Kirby (of course) makes it look great and the final panel—in which Dr. Blake tells the scientist’s mom he died a hero—is touching despite its corniness.

That’s it for March. Next week, we'll tour Europe with the Haunted Tank. In two weeks we'll look at April 1970, in which the FF fight a monster who may not be a monster; Spider Man encounters a new villain; and Thor discovers there’s been a change in leadership back home in Asgard.