For what they are, the serials are pretty good, but they made the mistake of changing the titular character from a city cop to a G-Man. That just isn’t right for —he has a city cop vibe that fits him perfectly. The serials, therefore, don’t really feel like they’re about the “real” Dick Tracy. (Though Ralph Byrd does strongly resemble the comic book character.)

But when RKO decided to make some feature films beginning in 1945, they fixed this. was returned to the police department of his unnamed big city, which was infested with the highest percentage of bizarre criminals this side of . The films also brought back much of his supporting cast from the comic strip, most of whom had been sadly missing from the serials.

Morgan Conway plays a tough, no-nonsense in the first two films. If I had to pick my favorite actor as , I’d probably go with Byrd. But that’s subjective, since was arguably the better actor of the two and does bring an appropriate air of competence and stubborn determination to the role. 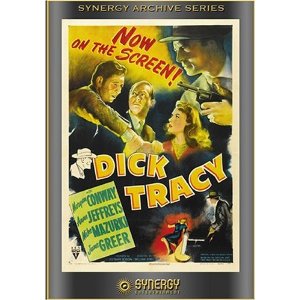 We start out with 1945’s Dick Tracy, Detective. And it is indeed a fine start. There’s a strong script involving an apparent maniac who leaves extortion notes, then kills his victims whether they pay or not. Dick and his partner Pat Patton look into it, running into a number of quirky characters who are both suspects and potential victims. It gradually becomes clear that the killer isn’t the same person writing the extortion notes. And it also becomes clear that there is a pattern to the seemingly unrelated murders.

I like the way the story plays out—Dick and Pat spend most of the movie logically following clues, making incremental progress without any clear idea either the killer’s identity or motivation for most of the movie. Then, when it all finally starts to come together, the killer snatches up Dick’s girl Tess Trueheart. But then Tess went to the for Girl Friends of Heroes, so she knows darn well its her job to get kidnapped.

Well, we know the killer’s identity from the get-go, even if doesn’t. The killer is known as Splitface—a nickname derived from the vivid scar that runs down his face. Though not a character from the comic strip, he has that same menacing vibe that made Gould’s villains so memorable.

Of course, Splitface is played by Mike Mazurki, who pretty much holds the patent on being menacing in such roles. In fact, on the Lon Chaney Standard Menacing Scale, I think he scores a 9.3. And that darn scar amps up his scariness at least another half-point.

Always remember, by the way, that when watching a movie with Mike Mazurki in it, you are obligated by tradition to shout his name aloud when he first appears.

But what makes the movie really work is director William Berke’s use of unusual camera angles and the film noirish use of light and shadows.  From start to finish, the movie is simply fun to look at. The noir sensibility of the film also adds a palpable degree of suspense and brutality to a couple of the murder scenes (though it does so without making those scenes unpleasantly graphic).

In the end, we get an energetic fist fight between Tracy and Splitface aboard an old, abandoned riverboat. That looks cool as well. But then, how could it not look cool? It’s Dick Tracy vs. Mike Mazurki, for gosh sakes.