And She Can Cook Too!

As far as I know, Agatha Christie's Miss Marple is the first elderly spinster who turned out to have a talent for solving crimes. But Miss Marple's success opened the floodgates for a lot of imitators.

The best of these might very well be a sharp-tongued school teacher named Hildegarde Withers. We first meet her in the 1931 novel The Penguin Pool Murder, written by Stuart Palmer. It would be the first of 18 novels and short story anthologies featuring Miss Withers. Acerbic she might be, but Miss Withers is (as mystery historian Otto Penzler states) "...a romantic at heart and will extend herself to help young lovers." 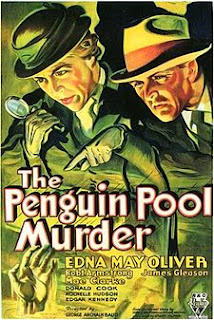 This brings us to Edna May Oliver, a well-known character actor who specialized in playing shart-tongued spinsters. So when RKO adapted The Penguin Pool Murder into a film in 1932, Edna was the perfect actress to drop into the role.

We first meet Miss Withers when she brings her students to an aquarium on a field trip. She casually trips a fleeing purse snatcher and lectures her students to "never try to evade the law with an umbrella between your legs."

Like most amateur detectives, Miss Withers is pretty much a magnet for crime. A few minutes after foiling the purse snatching, she witnesses a body being dumped into the penguin pool.

Well, you can't expect Miss Withers to witness a crime and NOT voice her own opinions about it--especially after its discovered that a hatpin taken from her is the murder weapon. Soon, she and the equally acerbic Inspector Piper are defacto partners in solving the crime. And it will take some solving--there's at least three suspects with means, motive and opportunity. Miss Withers, though, might just have an idea for trapping the killer into giving himself/herself away.

It's a fun film, balancing the comedy with a good mystery plot. Oliver really was tailor-made for the role and James Gleason (as Inspector Piper) plays off her perfectly.

But this won't be the last time Miss Withers will be called upon to solve a murder--which is a good thing as the world really doesn't have a sufficient supply of elderly women who solve crimes. Oliver will appear in two more films in the series (leaving the role when her contract with RKO expired). We'll take a look at those other two films soon.