A few months ago, we took a look at one of the railroad stories written by Frank H. Spearman. I mentioned at the time that I had never read Spearman's best-known novel Whispering Smith, which was one of the
best-selling novels of 1906. It's also been filmed a number of times, with the first version produced in 1916 and the last in 1948. There was also a short-lived television series starring Audie Murphy made in 1961. 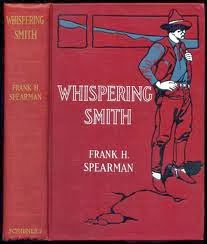 It's set in the turn-of-the-century Old West, where the resourceful George McCloud is a new railroad supervisor based in the town of Medicine Bow. One of the first things McCloud has to do is fire work-gang leader Murray Sinclair, because Sinclair refuses to give up his "right" to loot valuables from a wrecked cargo train.

This causes a lot of trouble. Sinclair is popular with his men and with many of the ranchers in the area, many of whom think Sinclair is being treated unfairly. That makes McCloud unpopular enough to pin a target to his back. And Sinclair does not otherwise go quietly into the night. It's not long before one train is wrecked and another is robbed. That Sinclair is responsible is obvious, though no legal proof exists. 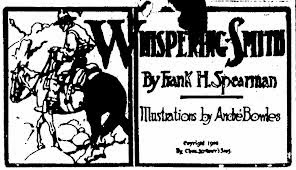 All this has brought Gordon "Whispering" Smith into the picture. He's the railroad's trouble-shooter, a job that largely involves making sure outlaws and thieves do not interfere with railroad business. Over the course of the story, this means facing down a known killer who is after McCloud, arranging a raid of a canyon used as an outlaw hideaway and organizing a posse to track down Sinclair.

The fact that Sinclair and Smith were boyhood friend makes the job more difficult. The additional fact that Smith is in love with Sinclair's estranged wife Marion makes it even more difficult.  But it's a job that's gotta be done.

(Something important to Smith's character should be mentioned here. Smith has never approached Marion about how he feels or done anything to dishonor her marriage--regardless of how unhappy that marriage might be.)

I really enjoy Spearman's prose. There's a lot of understated humor present and at times the story almost give the impression of rambling aimlessly. But it never really rambles at all--the events and the characters are all laid out for us clearly and the plot unfolds logically. We are given an often vivid impression of the time and place in which the story is set. 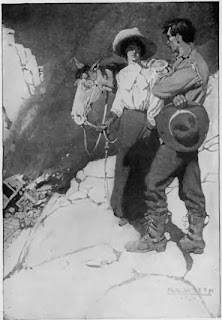 The characters are great as well. George McCloud and his love interest--the pretty and very brave Dicksie Dunning--both get their respective Crowning Moments of Awesome, while Whispering Smith proves to be brave, smart, resourceful and compassionate.

It's impossible not to like and admire Smith. There's two related incidents in the book that really define his character. When a compatriot of Sinclair kills a rancher and orphans a ten-year-old boy, Smith takes it on himself to comfort the boy and see to his future welfare. But a few chapters later, when he mortally wounds a murderer, he also takes it on himself to give what comfort he can to the dying man. Nothing Smith does or says excuses the murderer's actions--but Smith is not capable of turning away from a suffering man.

The action scenes are also done well and involve a nice mix of railroad stuff and gunfights. One particularly exciting chapter involves McCloud figuring out how to save himself and a work crew when they are caught in a blizzard while laying new track. Another involves Smith in a gun fight against three outlaws--in which the horse he is riding begins 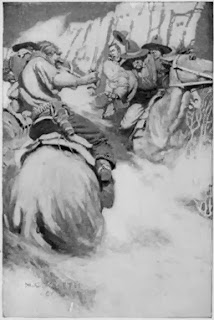 to panic when the bullets start to fly.

It is a terrific novel, telling an exciting story while often giving the impression that you are listening to a grizzled Old-Timer telling you the tale while you are sitting around the fireplace.

Anyways, just as I was finishing the book, I was reminded that I actually own the 1948 film. I bought it awhile back as part of a four-movie set I found in the $5 bin at Wal-Mart, but had forgotten I had done so. I think we'll take a look at this film next week. It'll be fun to compare it to the novel.