During the 1950s and 1960s, DC Comics used to do often awesome stories they dubbed "Imaginary Stories." These were tales that took place outside regular continuity--in which Superman got married and had sons; or Flash reveals his secret identity; or Lex Luthor finally kills the Man of Steel.

It took awhile for Marvel Comics to jump on the "alternate continuity" bandwagon--probably because they were essentially starting fresh in 1962 and it took awhile to build up a coherent history that was worth playing with. In 1977, Marvel began to publish "What If?" which dealt with concept such as "What if Spider Man had stopped the burglar who would have killed Uncle Ben;" or "What if Rick Jones had become the Hulk."

These were fun ideas, allowing the writers and artists to play outside the normal sandbox and sometimes really surprise the readers with some unexpected plot twists.

This week, we'll look at a DC "Imaginary Tale," then next week we'll investigate a "What If" story. 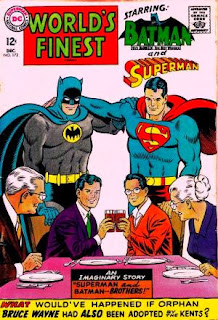 Not blood brothers, of course, since they were born on different planets. Though, come to think of it, it would be fun to come up with a bizarre explanation for how they COULD be blood brothers.

But what if the Kents simply adopted Bruce after Bruce's parents were killed by Joe Chill? 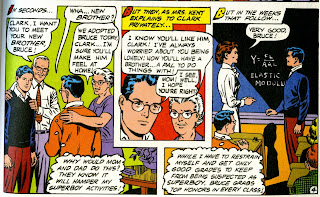 Well, Clark seems a little jealous at first--after all, Bruce doesn't have to hide how smart and athletic he is at school to protect a secret identity. This leads Clark to assume the worst when he discovers Bruce is secretly studying criminology and designing a bat suit. Obviously, Bruce is planning on becoming a super villain. 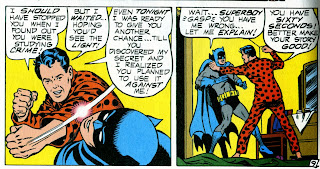 Clark soon discovers that Bruce wants to fight crime and the two team up. (The one awkward part of this otherwise fun story is Bruce adopting the name "Bat Boy" while he's still a teenager. There's no way to say that without it sounding like the character from the old Mad Magazine parody.)

When Bruce turns 21, he inherits Wayne Manor. He, Clark and the Kents move in. Clark gets a job with the Gotham Gazette in this reality. 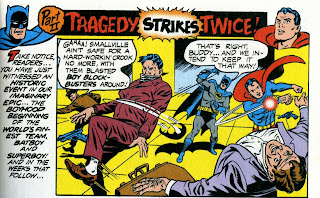 Lex Luthor shows up to be the brothers' collective arch enemy. There's a caption that tells us Clark and Lex never met as kids in this continuity, making me wish there'd been another page or two of story to explain why Lex still turned out bald and evil.

But even so, the story remains strong. Lex lures Superman to another city, kidnaps the Kents and forces Batman to run a gamut of death traps in an attempt to save them.

Curt Swan's art is particularly excellent during this sequence, showing us a Batman who has been dipped in 120%-pure Awesome Sauce has he battles past one death trap after another. When its apparent that he's going to win, Lex cheats and sets off the bomb early, killing the Kents.

Bruce can't deal with the grief of losing yet another set of parents and plans to give up crime fighting. To change his mind, Clark flies him to the 30th Century, where Batman becomes a member of the Legion of Super Heroes. He can keep fighting bad guys without having to deal with too many painful reminders of his loss.

Despite the awkward use of "Bat Boy" during the first half of the story, there's a lot of honest emotion generated here. Clark's jealousy of Bruce early on seems real to me, while Bruce's reaction to the death of the Kents (he's stopped from beating Lex to death only when the cops arrive and tell him to stop) conveys sincere rage and grief. Even Lex--going from arrogant to panicky as Bruce runs his death trap gamut--comes across as real. Writer Jim Shooter really is at his best here.

And to be fair, what would you have called him other than "Bat Boy?" "Bat Kid?" "Bat Lad?" There's really nothing that works, is there?