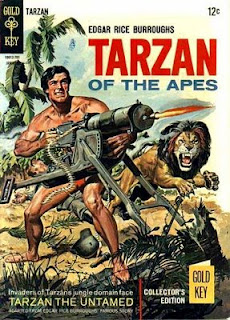 Tarzan goes all Rambo on the Germans. This is a Russ Mannning adaptation of Tarzan the Untamed, the 7th Tarzan novel. Tarzan thinks poor Jane has been killed by the Germans during the outbreak of the First World War, so you really can't blame him for being annoyed.

Edgar Rice Burroughs actually wanted to kill Jane off for real in this novel, thinking that he needed to free the Lord of the Jungle from domesticity so that he could go off on adventures. Editorial decree saved Jane's life and Tarzan managed to get in quite a bit of adventuring anyways.