Last week, we looked at the 1906 novel Whispering Smith, which was made in a movie five times between 1916 and 1948. The last film, which starred Alan Ladd, seems to be the only one available to watch.

But that's okay, because it's a really outstanding movie. 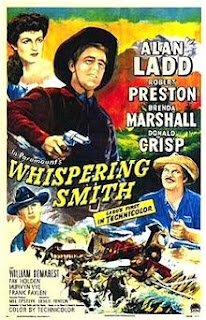 The differences between the book and the movie are interesting. As one would expect, a lot of the supporting characters are eliminated or have their roles in the story reduced. Most notable in this is railroad supervisor George McCloud. In the novel, he's pretty much a co-protagonist. In the movie, he's very much a supporting character. His love interest, Dicksie Dunning, vanishes completely.

The most notable difference is how the movie handles the villain, Murray Sinclair. In the novel, he's pretty much already a lost cause. But here he's still close friends with Smith and still living happily with his wife Marion. The movie opens with Smith taking out a band of train robbers, but he's wounded in doing so. His convalescence is at Sinclair's home, allowing the movie to establish their friendship (and show us that Smith is also in love with Marion--though as in the novel he's too honorable to follow up on this).

Sinclair has his faults, but he's not an out-and-out villain quite yet. Even when he loots cargo off wrecked trains, he does so because this is considered the traditional thing for railroad workers to do and he doesn't really think of it as stealing. But when this costs him his job, he hooks up with an outlaw gang and begins his true moral decline.

Even so, Whispering Smith tries to help him, even offering to allow him to leave the territory without being arrested. At Marion's urging, Sinclair is ready to do so. But then a man is killed during a train robbery and its now too late to turn back.

It's an interesting and effective twist on the characters from the novel--using pretty much the same personalities and backgrounds, but turning the story into a human tragedy centered around Sinclair.

Ladd gives a typically strong performance as Smith, while Robert Preston is very good as Sinclair. Preston eventually became synonymous with con artist Harold Hill from The Music Man, so it's a lot of fun to watch him play the burly, quick-tempered Sinclair.

The movie seems to have moved the action back in time a decade or two. The novel has telephones and a smattering of electric lights. The movie is set more solidly in what we commonly think of as the Wild West, with nary a phone line in sight.

Another difference between book and film: Smith's first name is changed from Gordon to Luke. I have no idea why, but there you have it.

There's one thing that both the movie and the novel have in common that I simply love--both versions of the story completely respect the sanctity of marriage. Both novel Smith and movie Smith are in love with a married woman, but both Smiths instantly and completely reject the idea of following up on these feelings. Neither Smith will dishonor a good woman by suggesting she be unfaithful.