When we visited Leigh Brackett's version of the Solar System a month or so ago, we spent some time in the swamps of Venus and aboard a space ship populated by space gypsies. But just about every planet in Brackett's Solar System is a source of adventure.

"Demons of Darkside," first published in the January 1941 issue of Startling Stories, takes us to Mercury. And Mercury is a planet that is quite likely to kill you--if it doesn't drive you insane first. 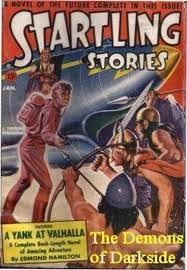 But Barry Garth has to go there. He's wanted for murder and the woman he loves is about to be executed for that same murder. There is just one person who has the information that can prove their innocence. But this person is probably the murderer. Also, the guy's space yacht just crashed on the dark side of Mercury.

No one has ever come back alive from Darkside. Or so everyone thinks. When Barry steals a salvage ship in a desperate attempt to find the wrecked yacht, he learns that at least one person has returned from Darkside alive. But that person left his sanity behind and now stays perpetually drunk while screaming sentences such as ""Ye thought ye had me once, ye black demons of hell, but I cheated ye!"

Barry has no choice,though--either he finds the wrecked yacht along with evidence to clear himself and his girl, or the poor girl will be executed.  Besides, all that talk of demons must just be the ravings of a madman.

Barry reaches the Darkside, only to discover that the "demons" are indeed real.

"Demons of Darkside" is a nifty little horror story--steadily building up tension and making Barry's encounter with the "demons" a truly creepy experience. The eventual payoff--involving the identity of the demons and the resolution of Barry's plight--is effective and satisfying.

This is one of four stories set in Brackett's Solar System that take place (in whole or in part) on Mercury. We'll be taking a look at the remaining three over the course of the next few months.