In the average issue of Turok, Son of Stone, Turok is the main protagonist with the younger Andar following his lead. This makes perfect sense, of course. Turok is the title character, the older of the two and was cast as Andar's teacher/mentor/surrogate father fairly early in the series. 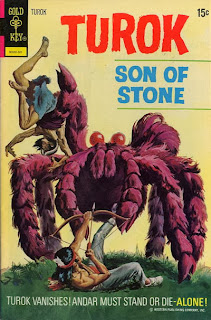 But every once in a while, Andar would get to demonstrate that he was no slouch in the hero department as well. In Turok #82 (January 1973), for instance, Turok goes missing early in the story. Andar is completely on his own.

This happens when the two Indians come across a deserted village on the side of a lake. When Andar is knocked after a tussle with a lake monster, Turok is captured by someone. 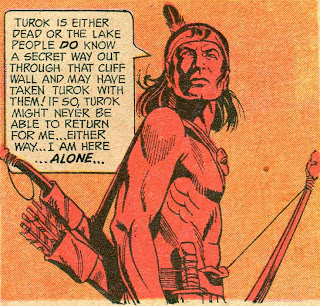 Andar is on his own with no idea what happened to his friend. He meets a tribe of murderous nomads and discovers they had enslaved the inhabitants of the lake village. But the Lake People had fled--perhaps taking Turok with them. Andar can't know for sure.

The witch doctor of the nomadic tribe wants to kill Andar, but a demonstration of fire-making and the killing of a dinosaur with a poisoned arrow actually gets Andar the witch doctor's job.

But that doesn't make life any easier for the young Indian. Darg, the displaced witch doctor, tries to do him in a few times. But Darg is killed by a giant spider, solving that problem. (It's a nice touch that Andar tries to save Darg despite their rather unpleasant history with each other.)

That night, the Lake People return--led by Turok who is hoping to find Andar. In the ensuing battle, the two Indians flee and resume their search for a way out of the lost valley.

This is yet another example of the solid storytelling found in so many Gold Key comics from that era. The art by Alberto Giolitti is a lot of fun with several great action sequences. It was nice to give Andar his day in the spotlight and watch him demonstrate the level of courage and intelligence that Turok had been showing him for so long.

We never do find out who wins the fight between the Lake People and the nomads, though.

As a side note, I used to be critical of a lot of Dell and Gold Key's interior art--and have even knocked it a few times on this blog in the past. But as I read or re-read a lot of Dell/Gold Key stuff with the intention of writing about it, I'm realizing that the art is usually good and often excellent. I'm not sure where my original prejudice against Gold Key art came from--perhaps the superb painted covers they used gave me skewed expectations for what was inside. But nowadays I rarely if ever see anything wrong with the company's pencils.