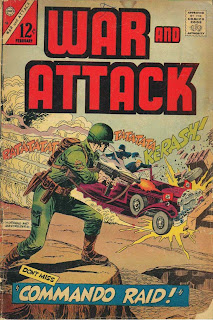 Like most other comic book companies during the 1960s, Charlton Comics published war comics usually centered around the Second World War. Charlton never achieved the same quality in this genre as did DC, but they gave us some worthwhile stories all the same.

So issue #58 (Feb. 1967) was the fifth with the new title. With an effective cover by Dick Giordino, it gave us four separate stories, none of them more than 8 pages long.

But 8 pages is just fine for some stories. Such a tale--if done correctly--jumps right into the action, moves along briskly and gives us a satisfying ending. 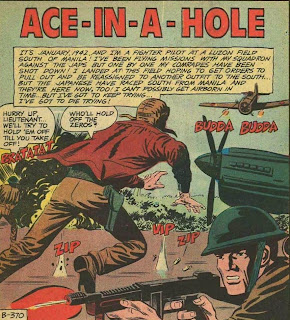 In the very first panel, the put-upon pilot is sprinting for his plane even as the airfield is being strafed from the air and attacked from the ground. So, yes, the story does indeed jump right into the action. In fact, it jumps so quickly, we don't even get a chance to learn the guy's name.


The soldiers defending the field are dying. His fellow pilots have already died. A Japanese vehicle is barreling down the airfield right at him. The pilot is understandable in a panic, wondering if he should surrender and convinced he can't possibly survive.

But he's got to try to get airborne, if only because every other option seems even more impossible. He spins the plane out of the way of the enemy truck and manages to put a machine gun burst into it. A Japanese machine gunner has him cold, but there's at least one living American soldier still on the ground and he gets some help in the nick of time. To his own surprise, the pilot gets into the air.

Now if he only had some idea what to do next.

Well, he might as well do what he can. He strafes the Japanese ground troops attacking the field, then goes against three Zeros, downing them all.  Out of gas and ammo, he is forced to land on the field he just left, where one other surviving soldier and some Philippinos are waiting. The Philippines are lost, but they have the opportunity to join up with the guerillas and keep fighting. Heck, maybe they can even scrounge enough spare parts to keep the plane flying for awhile.

"Ace-In-The-Hole" is an effective short story, generating real excitement and, when you think about it, giving us an interesting protagonist. The pilot goes from near-panic to doing something simply because there was no other choice. Because of this, he regains his composure and fighting back aggressively. The emotions seem honest and very human. What would have been a perfectly good action set-piece is given a little bit of depth by this nice bit of characterization.

War and Attack is in the public domain now, so you can read this issue HERE.