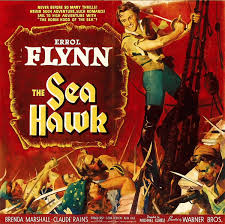 The 1940 version of The Sea Hawk really was supposed to be a remake of the silent film and also based closely on the original novel. It really was. But somewhere in the rewriting process, the story was altered into something original.

It's still set in the Elizabethan Era and the main character is an expert pirate--ur, I mean privateer. But other than that, it really has no connection with Sabatini's novel. But the original intent and the fact that Sabatini's name was heavily used in the promotional materials means I'm including it in my mini-series covering the novel and its film adaptations.

Also, that gives me an excuse to watch it again, which is never a bad thing. The Sea Hawk is a magnificent swashbuckler.

Errol Flynn is Captain Thorpe, one of Queen Elizabeth's Sea Hawks (actually called Sea Dogs in real life)--the privateers who essentially did black ops missions, robbing the Spanish to contribute to the English treasury, thus allowing Queen Bess to build a navy large enough to defend against the Armada. 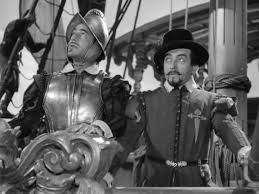 The movie starts off with a bang, with Thorpe's ship Albatross capturing a Spanish galley, looting it and freeing the Englishmen who were slaves at the galley's oars. This is where Thorpe gets a chance to meet Maria, the half-English niece of the new Spanish ambassador to England.

Soon after, Thorpe comes up with a plan to rob the Spanish gold caravans crossing Panama. But the Spanish find out about it (I like the Sherlockian investigation the Spanish ambassador pulls off to figure out Thorpe's plans), leading to the capture of Thorpe and his men.

Thorpe now has to engineer and escape from a galley AND get back to England in time to warn the Queen about an impending invasion. But a mole for the Spanish in the English court could make that task difficult.

It's great stuff, filmed in lush black-and-white, with Erich Korngold's score arguably surpassing even his work on The Adventures of Robin Hood.

In fact, it's more worthwhile comparing the film to Robin Hood than to Sabatini's novel. Both films were directed by Michael Curtiz (though Curtiz replaced someone else on Robin Hood) and both star Flynn as the swashbuckling hero, Alan Hale as his number 2 man, and Claude Rains as the villain. Una O'Connor again plays the maid of Flynn's love interest and again falls for one of Flynn's men.

Heck, Maria (nicely played by the nice-to-gaze-upon Brenda Marshall) follows a similar character arc to Olivia DeHavilland's Maid Marian. She is contemptuous of Thorpe at first, but is soon won over. Just as part of this process with Maid Marian was seeing some of the victims of Norman oppression in Robin Hood, Maria's change-of-heart begins when she sees some of the weak, emaciated galley slaves freed after Thorpe captures the ship on which she was passenger.

The Robin Hood vibe was obviously deliberate--Warner Brothers would have wanted to capitalize on the success of that earlier film. But The Sea Hawk still has a personality of its own. Thorpe, for instance, is a more stern and military-like leader than was Robin, while parallels to the then-current war in Europe are here that were absent from the pre-war Robin Hood. This last bit, though, was done well, making the parallels a natural part of the story.

Claude Rains, by the way, plays the Spanish ambassador with the same sort of calm villainy he gave Prince John in Robin Hood. This time, he's backed up by Henry Daniell as the Spanish mole in England. That actually leads to one departure from the Robin Hood template. In that film, Prince John is backed up by two co-villains--Sir Guy and the Sheriff--who each have distinctive personalities. But here, both villains have the same calm-but-evil vibe. One might consider this a fault, but both Rains and Daniell are so good at being calm-but-evil, the lack of variety in the villiany does not hurt the story at all. 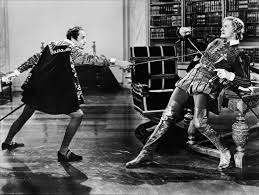 There's a lot of atmosphere in The Sea Hawk. When it should be exciting and fast-paced, it is. When it needs to be tense and even a little creepy (see the scene I'm embedding below), it manages to do that equally well. The tone of the story shifts with the various plot twists, but with a smoothness that makes the movie as a whole work so well in terms of basic storytelling and plot construction.

Finally, you can't talk about The Sea Hawk without mentioning Flora Robeson as Queen Elizabeth. She exudes strength, intelligence and determination--you completely accept her as a capable leader who inspires absolute loyalty in her subjects.

So that's it--over the past couple of weeks, we have looked at a brilliantly written adventure novel followed by a magnificent and faithful silent film adaptation, followed by a sound film that morphed into something different but still gave us one of the best swashbucklers ever produced.